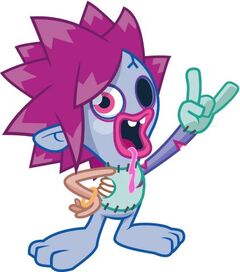 Zommer is a character that represents the Zommers species. He's a rocker, loves Wobble-ade and is rather daft. They appears on the Music Rox! album with their single Rock Like A Zommer and is one of the protagonists in the Moshi Monsters Movie along with their friends Poppet, Katsuma, Furi, Luvli and Diavlo.

Out of the whole line-up, Zommer seems to be the most detached and goes their own way out of impulse and perhaps a slight carelessness. They tend to drool a lot, pick their stitches, play with their eyeball and of such monstrous lack of bodily care.

In Music Rox! his song is performed on stage and the introduction has Poppet telling Katsuma to hurry up because Zommer is nearly on. Zommer is cheered on by audience in the mean time. His rock performance requires the audience at his concert as backing vocals. In The Sha La La Goodbye Song, Zommer is one of the more prominent speakers and shouts one of his lyrics "yo granddad; if it's too loud, you're too old!" in the background. In the events of the release of Music Rox!, Zommer has voiced -according to Zack Binspin- to want to remix his single Head Over Heels. Zack phones Zommer to voice his agreement but Zommer initially has no clue who they're on the phone with. They also speak in Monster lingo instead of "English" like he does in Music Rox! Zack does speak in "English".

In the Monsterrific Comic Collection, Zommer voices to be a fan of Beau Squiddly, whose performing days are over.

In the movie, he is the sole main character to decide to go off track to do a rock performance for the Hoodoos and is picked up by the villains for no particular reason other than already having caged and chained up his detached arm. Big Chief Bill accepts him and becomes a fan for Zommer's electric guitar jamming. Zommer later on performs on stage with Blue Jeepers where they do a listen & repeat game. Bobbi SingSong judges Zommer's performance to be good but an electric guitar is no sitar.

Zommer is a punk zombie that is falling apart if it weren't for their stitches and with detachable limbs, specifically the right arm and eye. Any Zommer has only one eye socket filled and this eye can move freely to the other socket. Though able to have any arm, they picked a feminine human arm that has a sense of self-care and etiquette. A Zommer's default colours are blue-ish purple skin, red-ish purple hair and a light-skinned human arm. The haircut is a punk look with a shaved side. 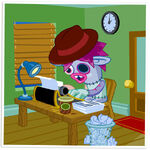