Wuzzle the Wandering Wumple is a rare Moshling in the Gurus set in Moshi Monsters. They bear a strong resemblance to a sensei. Wuzzle is an ancient Moshling who lived before the Great Custard Flood. They enjoy drifting around.

Wuzzle could be obtained by subscribing to the Moshi Monsters Magazine, though it has since been replaced by Weegul, making it impossible to obtain at this moment.

There's no place like home, but try telling that to a Wandering Wumple. These ancient Moshlings have been roaming the world of Moshi looking for somewhere to settle ever since the Great Custard Flood of 99999.5. I've studied countless books in an attempt to locate their lost village but I fear it is probably buried under lashings of solidified custard. Besides, I think Wandering Wumples enjoy drifting around, as it gives them a chance to play with their magical heart-shaped charm that glow whenever a fellow Wumple is nearby. Well, at least they are never lonely!

These wise little Moshlings have been roaming the world of Moshi, imparting wisdom while searching for somewhere to settle, ever since they fled their mystery homeland following the Great Custard Flood of 99999.5. Most Wandering Wumples carry a magical heart-shaped charm that glows whenever a fellow Wumple is nearby.

Here, there and everywhere. 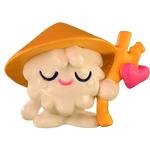 Retrieved from "https://moshimonsters.fandom.com/wiki/Wuzzle?oldid=272245"
Community content is available under CC-BY-SA unless otherwise noted.