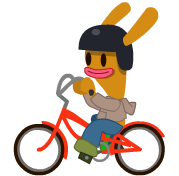 HAHA! Looks like they got a HOLE in their plan!

Weevil Kneevil is a stuntman and bike rider in Monstro City who is often riding across Sludge Street, however, is only seen in-game from Main Street. They are a parody of Evel Knievel, a famous American stuntman.

Weevil Kneevil is also featured as the protagonist in Downhill Dash.

Main
Weevil Kneevil weaves and winds his way through the crowds on Main Street, delivering parcels between Yukea and Bizarre Bazaar. There is a rumour racing around that he's actually delivering love letters between the shopkeepers, but Weevil insists this isn't true.
Tour de Monstro City
Speedy Weevil loves tearing around the streets of Monstro City and is very attached to his shiny orange bike. In fact, you'll rarely see him not on it, except when he falls off it, that is!
Accidents happen
Weevil has been known to have the occasional biking mishap, but he accepts that they're simply part of the winding path that is his crazy courier career.
Data File
Hangout: Main Street
Catchphrase: "Wheelie wild wheelies"
Likes: Stunts, mountain biking down Mount Sillimanjaro
Notes

Weevil Kneevil is Main Street's only courier. He delivers parcels between Yukea and Bizarre Bazaar. Some whisper that he's delivering love letters between the shopkeepers, but Weevil swears it's only his prize-winning pickled blueberry rings.

Retrieved from "https://moshimonsters.fandom.com/wiki/Weevil_Kneevil?oldid=263125"
Community content is available under CC-BY-SA unless otherwise noted.