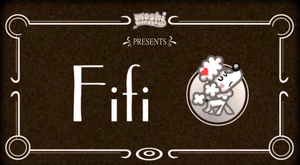 Uptown Fifi is a song about Fifi that was released in the Moshi TV Show in December 2012. In the beginning of February 2013, it was uploaded on the Moshi Monsters Official YouTube Channel. A week later, it was shown on The Daily Growl.

It features in the second Moshi Music album, The Movie Soundtrack, but does not appear in the movie.

Fifi is shown snuffing in a jacket, throwing out the wallet and picks up a credit card. Before leaving, she check if Bubba is looking and frighteningly attempts to sneak off. Bubba jumps up, only shown as a shadow hovering over her. He scolds her and she drops everything to run off. As soon as she hits the sidewalk, she puts her nose in the air and strolls off.

She encounters many Moshlings who try to woo her but none of them manages to impress her. Scrumpy presents her a Fablo Fiasco painting, Humphrey tries to attract her with a Traditional Turkoy, Mini Ben attempts to surprise her with a Jack in the Box, Rocky just shows her a rock and Pocito strikes a few poses. Nothing that could bother Fifi until she encounters McNulty balancing a bone and becomes smitten. Next shot, McNulty is proudly parading along new found love, who was given the bone. Bubba -in pixel style art shift- has however found them and chases them around town while they take a run for it.

The video's animation is made to resemble silent film of the late 1920s. After Bubba encounters the couple, the style switches to 8-bit, creating both a contrast between old and new, and also both styles being the earliest version of such styles. The only thing in colour during the silent film parts, which takes up most of the video, is the heart clip Fifi wears in her hair. During their bone balance, McNulty is grey, but after being chosen by Fifi, they regain regular colours while the rest of their surroundings do not. 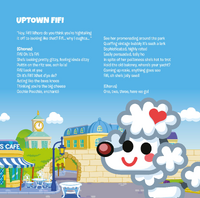 Hey! Fifi! Where do you think you're hightailin' it off to lookin' like that?
Fifi?! Why I outta...

Acting like the bees knees
Thinking you're the big cheese
Oochie Poochie Enchanté!

See her promenading around the park
Quaffing, vintage, bubbly, it's such a lark
Sosphisticated, highly-rated
Easily persauded, tally-ho!

Acting like the bees knees
Thinking you're the big cheese...
One, two, three, here we go!

Add a photo to this gallery
Retrieved from "https://moshimonsters.fandom.com/wiki/Uptown_Fifi?oldid=268324"
Community content is available under CC-BY-SA unless otherwise noted.