Twistmas is the festive holiday that is celebrated in the lead up to December 25 in Moshi Monsters. Twistmas is a pun on Christmas, both are celebrated on the same day and have a lot in common.

From 2008 to 2012, during Twistmas, twelve items were hidden (one every day for twelve days) in stores and monsters had to find the item's store from a clue posted on the The Daily Growl.

All items apart from the clothing items and food items were sold in surprise presents/crackers so those who purchased wouldn't know until the item was dragged from their inventory to their room.

The Moshi Monsters 12 Days of Twistmas was a Twistmas Secret Codes promotion that was held on moshigift.com in 2011. Each day for twelve days from 14th December to 25th December, a new code was posted on the website, all with a one-time use.

The items from moshigift.com in 2011 returned in 2012 and were released with issue 24 of the Moshi Monsters Magazine, where Cap'n Buck did a 12 Days of Twistmas treasure hunt to create the item codes, given the beginnings and with the endings found throughout the issue of the magazine. These codes remain active and are able to be used.

In 2012, five new items were released at Yukea as well as the older ones that had appeared in stores each year since 2008.

In 2013, the items from 2008-2012 apart of the '12 days of Twistmas' did not return, neither did the secret codes from the moshigift.com. Instead, The Great Twistmas Giveaway promotion took place. Everyday from December 18th until January 5th, for nineteen days, a new secret code was shown by a pop-up alert.

The Ghost of Twistmas Past

The Ghost of Twistmas Present

The Ghost of Twistmas Future 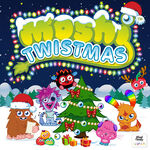 The album cover for the Moshi Twistmas song, old version of the Twistmas poster

The replacement for the Twistmas poster that came with the book: The Night Before Twistmas. 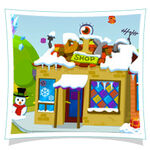 Retrieved from "https://moshimonsters.fandom.com/wiki/Twistmas?oldid=282461"
Community content is available under CC-BY-SA unless otherwise noted.