Truffle the Splendid Sproutling is a rare Moshling in the Woodies set in Moshi Monsters. They are a seed sprout. Truffle often spends their time in magical soil. It is unknown whether they sprout beanstalks.

You can get the Sprung Onions by entering the code "BEANSTALK60", this is from the Beanstalk playset. If you have already entered the code, you can get Truffle multiple times by buying Truffle's Carte Blanche plush toy.

Is that a mini beanstalk rising skywards from each and every Splendid Sproutling's head? No one knows for sure because these cute critters spend most days snuggling in magical soil. And when they do venture into Monstro City they wrap their mysterious green shoots in cling film.

Dig around the base of a Moshi beanstalk and you might unearth a few Splendid Sproutlings. Failing that, look in the greenhouses of Petal Park.

Potting sheds and the name Jack. 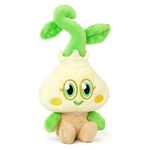 The silhouette of Truffle as shown in the picture opposite.

The next series of the Carte Blanche Moshling plushes, Truffle is the one on the left.

Retrieved from "https://moshimonsters.fandom.com/wiki/Truffle?oldid=272222"
Community content is available under CC-BY-SA unless otherwise noted.