Troy the Macho Minotaur is a upcoming Moshling in Moshi Monsters. They are a minotaur who were once employed for to guard over Puzzle Palace's Rox hoard.

Butch beyond belief, these bullheaded Moshlings were once employed by ancient monsters to stand guard over the huge Rox hoard stored in the maze beneath the Puzzle Palace. These days most Macho Minotaurs make a living selling their fast-growing hair to wig makers or performing in Moshi pantos.

Look in the hedge mazes behind the Puzzle Palace, or head to the mythical island of Moshipotamia.

Hair clippers and anything pink.

Troy's collector card
Add a photo to this gallery 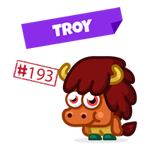 Retrieved from "https://moshimonsters.fandom.com/wiki/Troy?oldid=257975"
Community content is available under CC-BY-SA unless otherwise noted.