Moshi Movie Mystery is a four-part mission/quest in Moshi Monsters. It was first revealed in Issue 36 of the Moshi Monsters Magazine. It was released on December 16th, 2013. The storyline of the mission is that Dr. Strangeglove steals the Moshi Movie film at the premiere of the movie and the monsters have to get it back.

As in-fiction the Moshi Monsters: The Movie was a recording of events, many "actors" had not agreed to be part of it. As such, it is not too strange Dr. Strangeglove napped the Movie Cannisters (on the day of the preview for dramatic effect) so that nobody could watch it. Celebrating his victory, the doctor gets struck by lightning and drops his theft where it falls into the dark depths of Gombala Gombala Jungle, and is found by the Woolly Blue Hoodoos. Which means you are in for some nonsense if you want to retrieve the movie.

In the first part, you find yourself in Gombala, where several Hoodoos are scattered around telling you puns on approach. You meet with Big Chief Bill to ask him if he has seen anything. He did, points you in the direction of the Garden, but informs Moshi they will need a Lawnmower to reach the area and to look out for THE BEAST. Now the Hoodoos coincidentally happen to have a grand sale on a lawnmower. The sale being a bit high up in the Oakey Doakey Tree, it requires the task of retrieving a ladder that the saleshoodoo had lended Crazy Bill who is busy making Hoodoo Stew for himself. The lawnmower eats itself a way through the garden and you confront the BEAST!...it just happens to be Big Bad Bill on giants monster feet stilts who was pulling a prank. He hands you the "silver round thing" he assumes you were looking for and is not sure exactly where in the jungle the other canisters fell. At that moment, you both witness a booming growl and Bill takes his leave because he does not feel much inclined to find out what the source was.

Thinking you would encounter the actual Monster, you learn it's just the load snoring/yawning of a sloth.

To get the sloth to the Hoodoos' party faster, and thus get him out of the way for you to venture deeper into the jungle, you are required to build him a Flower-powered Rocket Pack!

This flower is close by on the upper right. It looks like fireworks.

"Sweeeet! Ok - we need three more things. How about a safety helmet, little buddy? I wanna land in one piece!" Going down and left brings you to a giant walnut tree and Fitch, who was ordered by Marty to look here for the cannisters. Fitch tells you the nuts are hard and strong thus suitable to function as a helmet. They chew the entire tree down just for one half of a nut.

"Super sweet! Some eye protection would be good, too..."

"Smooth, dude! How do they look? Alright, monster dude. Let's fire this baby up!" How? you ask yourself. Then you notice the "Fiery Frog" next to the Sloth. Just what you need. Feeding it a Chilli Pepper is your idea.

Previously inaccessible, except the first mission and Bug Rush, the Moshi team announced to have fixed the problem. Now all missions are playable again but only to certain extent. 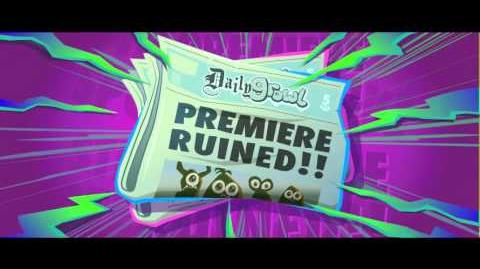 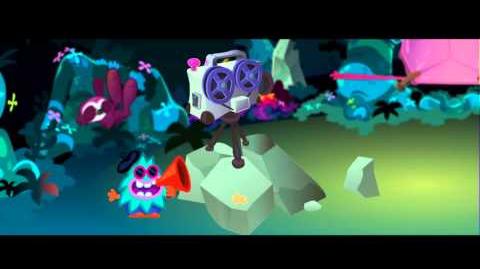