The Doctor Will See You Now

The Doctor Will See You Now is a Moshi Monsters song, sung by Dr. Strangeglove and the Glump Generation.

It appears in Season 1 Mission 8: Spooktacular Spectacular along with Moshi Moshi Moshi, remixed by Simon Growl. As reported by The Daily Growl, more specifically Roary Scrawl, Simon Growl tried to have a contract with Dr. Strangeglove after he heard the song. As there was suspicion surrounding Simon Growl's involvement with C.L.O.N.C., this added up to the storyline.

The song was released in 2011, after The Moshi Dance but before the Moshi Twistmas Song. 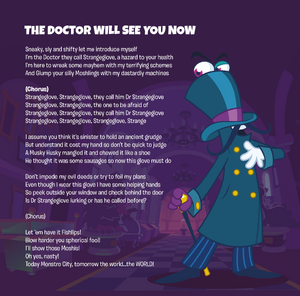 Sneaky, sly and shifty, let me introduce myself
I'm the Doctor they call Strangeglove, a hazard to your health

I'm here to wreak some mayhem with my terrifying schemes
And Glump your silly Moshlings with my dastardly machines!

I assume you think it's sinister to hold an ancient grudge
But understand it cost my hand, so don't be quick to judge
A Musky Husky mangled it and chewed it like a shoe
He thought it was some sausages so now this glove must do

Don't impede my evil deeds or try to foil my plans
Even though I wear this glove I have some helping hands
So peek outside your window and check behind the door
Is Dr. Strangeglove lurking, or has he called before?

Retrieved from "https://moshimonsters.fandom.com/wiki/The_Doctor_Will_See_You_Now?oldid=268317"
Community content is available under CC-BY-SA unless otherwise noted.