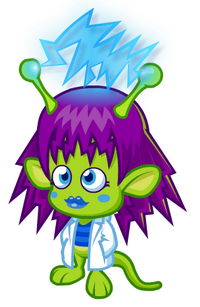 Lift your eyes to the skies and take a look at the ARGHmazing Moshiverse!

Tamara Tesla is Monstro City's own brainy scientist. She was born out of an experiment and raised in a giant petri-dish back in her hometown, Variable Valley. Ever since then, she's always enjoyed science and is barely seen outside of a laboratory (or even a lab coat for that matter!).

On January 22, 2010, The Daily Growl held a contest[1] to give an update to Tamara's look. Story-wise, this was prompted by Tyra Fangs, for Tamara was going on Valentine's date with either Dewy or Moe or at least was the plan.

The winning design[2], designed by oOlightningOo[3], was revealed and since then Tamara has kept this look.

Main
Tamara Tesla is totally and utterly monsterifically bright! Born out of a scientific experiment, she was raised in a laboratory in an enormous petri dish in Variable Valley. Since then, Tamara has rarely been seen out of a science lab - or lab coat!
Ingenious inventor
With her monSTAR problem-solving skills and intelligence, goopendously geeky Tamara busies herself by creating tricky puzzles. She also conducts electrifying (and electrocuting) experiments and investigates fangtastic phenomena!
Puzzle HQ
Tamara built her own lab at the Observatory at The Port, where she invents new and perplexing brain-teasers for The Puzzle Palace. Tamara is also a keen astronomer and stares at the stars in the night sky through the Mubble Space Telescope.
Data File
Hangout: The Observatory
Catchphrase: "Greetings!"
Likes: Watching weird Monstrovision, science conventions
Often spotted: Thinking hard!
Notes

Tamara likes Science, Roary Scrawl and Super Moshis as well as watching weird Monstrovision and science conventions. Her dislikes are C.L.O.N.C. and anything she can't explain.

Reared in a giant petri dish in Variable Valley, Tamara Tesla is Monstro City's own brainy scientist. She has a lab set up at the Observatory at The Port, where she invents new puzzles for the Puzzle Palace.

Daily Growl[4]
Tamara loves to conduct electrifying experiments, and thank to the blue lightning brainwaves that spark and fizz between her antennae, she doesn't even have to worry about her electricity bill. This goopendous geek has her own mobile power supply!
Tamara's pride and joy is the Mubble Space Telescope. This gigantic stargazing tool is so powerful that it can see all the way to the very edge of the swooniverse, and even pick up energy readings from the Big Boom that started it all!
Tamara says she does her best thinking in dreams. To make sure she never misses a genius idea, she keeps a notepad next to her bed and has trained herself to write in her sleep!
Tamara's hair looks like bolts of purple electricity, but it's not styling that gives her that cool, crackly look - it's those fizz-popping brainwaves shocking it into shape!

Tamara is a green character with a groundbreaking, innovative, positive and alert disposition. Tamara has a very rational fear of ghosts, contrasting the fact that she avidly experiments with potions and other laboratory equipment, ready for anything she may discover. She wears a white lab coat and blue shirt. In addition to this, she has a tail and one pair of antennae; between the antennae is a lightning bolt which, according to a Fact File[4] gives her a mobile power supply.

According to her fact file from the Moshi Monsters Magazine, Tamara is said to be friends with Elder Furi and Buster Bumblechops. Her friendship with Elder Furi appears to be noticeable as she takes his place in Super Moshi Missions: Season 2 when he goes missing as well as worrying about him stated in Moshi Mag Issue #14. In The Moshi Frosty Games, she helps Elder Furi brainstorm about a possible cure for Frosty Fingeritis, showing their relationship a bit more. She shows concern for him when she misinterprets his words: "I got it", thinking that he caught the sickness himself.

With Buster Bumblechops she is not yet seen to be interacting. It is possible that they get along as colleagues as they both do scientific work (Buster studies Moshlingology, the study of Moshlings, whereas Tamara does that along astronomy, chemistry, engineering and archeology).

Tamara has had romantic problems with Dewy and Moe Yukky. On New Year's 2010, the two shopkeepers went to give her the midnight kiss, bumping into each other. This continued into a storyline on the Daily Growl, where Roary Scrawl decided to hold a dance contest between the two of them and the winner could go on a date with Tamara. The results; a draw. The two were trying to win Tamara's attention with gifts to beat each other, knowing that they were both going on the date. Dewy went as far as to fetch a love potion and hid it in Tamara's lab. Roary (whose Birthday was on 13 February) found it, thinking it was a surprise present. He was startled by Tamara and spilt it over her, resulting Tamara falling in love with him. It is unclear if Tamara's likes are connecting to these events as it would imply the love potion will keep her poisoned forever.

Even after these events, it has been shown that Tamara is still friends with Moe and Dewy as she has been said to play Growlstation at Dewy's when they drew a moustache on Roary.

Tyra Fangs has been supportive of Tamara, having organized of the make-over and had a girl's night out with her when the love potion ordeal escalated.

During her first few years in the game, Tamara appeared frequently in Daily Growl articles, often with extreme puzzles for the readers.