Stanley the Songful SeaHorse is a common Moshling in the Fishies set in Moshi Monsters. Stanley is a seahorse who enjoys whistling annoying songs.

Although they are very cute, Songful SeaHorses are also incredibly annoying. That's because they can't stop whistling awful show tunes at ear-splitting volume. Each ear-splitting ditty is usually accompanied by a barrage of bubbles and a silly dance. My research suggests they are trying to attract other SeaHorses, but I've been unable to stand the racket long enough to confirm this. That's why I've invented a special squishy snout plug to muffle their trumpety blasts. All I need now is a volunteer to sneak up and plop it in. Any takers?

Although they are very cute, Songful SeaHorses are also incredibly annoying. That's because they can't stop whistling awful show tunes at ear-splitting volume. Each tune is usually accompanied by a barrage of bubbles and a silly dance. Experts believe they're trying to attract other seahorses but no-one can stand the racket long enough to find out.

Main
Songful SeaHorses like Stanley can be annoyingly noisy, as they like to whistle utterly terrible show tunes all day long! These crooning critters are often found bobbing up and down in Reggae Reef's shallow waters. But despite their obviously fishy nature, the songful SeaHorses can't actually swim very well!
Razzmatazz!
These flamboyant musical Fishies love to put on a show. To add to the whole silly Songful spectacle, every ear-splitting tune they whistle is accompanied by lots of bubbles and ridiculous dancing, Some say this is to attract fellow SeaHorses, but no one has hung around long enough to find out!
Whistle while you bathe!
Stanley loves whistling in the safe shallow water of the bath, but never uses bubble bath. After all, what's the point when the SeaHorses can blow their own bubbles?
Fact File
Moshling type: Fishies
Species: Songful SeaHorse
Hangout: Reggae Reef
Fishie friends: Blurp, Fumble, Cali
Notes

There's a reason the Songful SeaHorses are called songful: they can't stop whistling seriously annoying show tunes at top volume. Strangely, although they may look a bit like them, they really dislike Kazoos. When they whistle their tunes, they usually do a little dance and blow bubbles in the water, which is very cute!
Songful SeaHorses aren't very good at swimming and tend to hang around in the shallow end of the ocean - mostly around Reggae Reef. Although Songful SeaHorses love a good tune, they really dislike serious opera. They are also not fond of bubble bath, as all those frothy bubbles tickle their snouts!

Songful Seahorses are not very good swimmers so they usually bob around the shallow waters of Reggae Reef. Failing that, look in the bath.

Cuddly Stanley
Add a photo to this gallery 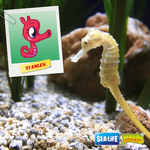 Retrieved from "https://moshimonsters.fandom.com/wiki/Stanley?oldid=265407"
Community content is available under CC-BY-SA unless otherwise noted.