Squelch the Needy Seedy is an upcoming Moshling in Moshi Monsters. Squelch belongs to the Fruities set. They are a watermelon. Squelch used to have fully round watermelons before being sliced in half with the other half being eaten.

It's no surprise that Needy Seedies need constant hugs and kisses because most of them are half the Moshlings they used to be - literally, because these timid critters are born with big round heads that keep getting sliced in half and scoffed by hungry Felon Melons. Ouch! 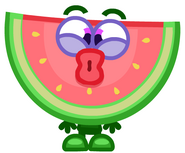 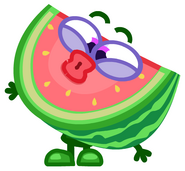 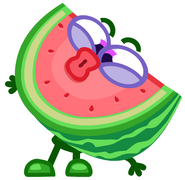 Retrieved from "https://moshimonsters.fandom.com/wiki/Squelch?oldid=284033"
Community content is available under CC-BY-SA unless otherwise noted.