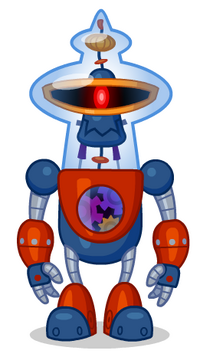 Hubbs! You stupid circuit board, hand me that supa spanner!

Sprockett is a character in Moshi Monsters.

He is always together with Hubbs, hence they are referred to as 'Sprockett & Hubbs'. Originally they worked for C.L.O.N.C., but were both fired after the Super Weapon failure and dumped in the jungle on Music Island.

Sprockett built the Robo Quacks that stole Baby Rox's voice, as mentioned by Holga in Pop Goes the BooBoo.

He helped the Zoshlings rebuild their ship in Masters of the Swooniverse and was also seen in at the beginning of Missing on a Star.

Sprockett is known to be the more mechanical robot but in Issue 6 of the Moshi Monsters Magazine, it was announced that his work was 'slapdash' and all of his machines eventually go wrong.

In 2013, a golden statue of him could be made online with six codes, the codes no longer work, although the individual items can be bought at Horrods.

Main
Sprockett is a serious and soulless robot, with a super short fuse! He and his hyperactive partner Hubbs make up S&H Industries, the accident-prone creators of many of C.L.O.N.C.'s most wicked weapons and contraptions. They even built a Super Weapon to destroy the sun. But Sprockett didn't care - as long as he met the deadline!
Monster mistake
Sprockett thinks he is the brainy half of S&H Industries, but this seems unlikely considering the teeny-weeny size of his central processor! In fact, both daft robots were sacked by C.L.O.N.C. because they didn't notice that the Super Moshis had sabotaged their designs for the Super Weapon, causing it to malfunction!
Boggy blunder!
Sprockett and Hubbs faced a squelchy ordeal when they fell into the Snaggletooth Swamp. Silly Sprockett got them gloopendously lost in the jungle, after they were both fired by C.L.O.N.C.
Data file
Often Spotted: In the Top Secret C.L.O.N.C. Laboratory
Catchphrase: "Bleep, bleep, brink!"
Likes: Tinkering with stuff, breaking things
Notes

Accident-prone creators of some of C.L.O.N.C.’s most dastardly contraptions (including various Glumping machines), Sprockett and Hubbs are the untrustworthy robotic duo who can’t stop squabbling. In fact they can’t even agree on who to work for. Put it this way, if you oil their cogs they’ll do your jobs!

Sprockett is the serious lunk with a short fuse who seems to think he’s the brains behind S&H Industries. Sadly his central processor is about the size of a shrivelled splatsuma (but don’t tell him that).

Retrieved from "https://moshimonsters.fandom.com/wiki/Sprockett?oldid=283827"
Community content is available under CC-BY-SA unless otherwise noted.