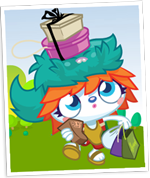 Snuffy Hookums is a character in Moshi Monsters and one of the few Moshlingologists. She is Buster Bumblechops' assistant in Moshling collecting, sidekick and a great friend. She returned to Monstro City after 1,874 days (about 5 years) on her own in the wild.

She features in the Official Annual 2013, which is explicitly dedicated to her, and in the The Ultimate Moshlings Collector's Guide.

Her green Moshling-stalker hat functions similarly to Simon Growl's hair. While not having any dialogue of its own, it has independent expressions, though it usually matches Snuffy's emotional state.

Snuffy Hookums was separated from Buster Bumblechops during their expedition to Mount Krakka Blowa due to untold circumstances that still left Buster enough time to leave her a note.

During her lone travel she was trying to find I.G.G.Y., but a lost tribe of "Candyfloss" Hoodoos, who turned pink by excessive consumption of candy floss, captured her and crowned her 'Kandyfloz queen'. While observing how a queue of Hoodoos bowed for her while bound to a chair, I.G.G.Y attempted to free Snuffy while wearing a candy floss disguise.
The Pink Hoodoos easily find out I.G.G.Y. is a fake hoodoo, on to which I.G.G.Y. chomps on Snuffy's ropes in haste to free her and fly off somehow.

Depending on the fiction, the search for I.G.G.Y. and the capture by the Hoodoos was the cause of Snuffy's separation from Buster.

Snuffy expected to receive a doctorate out of her discovery. She was however under the impression Woolly Hoodoos could only be blue, which she seems to have corrected herself on.
She was nauseous by the fumes surrounding Mount Krakka Blowa which also could imply she was hallucinating.

Main
Snuffy Hookums is Buster Bumblechops' faithful sidekick and leading expert in Moshlingology (that's all things Moshling to those not in the collectors' circle!). Snuffy once vanished on an intrepid Moshling mission near Mount KrakkaBlowa. Many assumed something monsterifically terrible had happened, but it just turned out that she was a bit lost.
The fur-fect disguise
Snuffy's super-furry Moshling-stalker's hat is great camouflage. It does a clawsome job of concealing her from critters as she studies them in their natural habitats.
Fangtastic findings
When heroic Ms. Hookums eventually made it back to Monstro City, she had many a Moshling tale to tell about her voyage of discovery. She collected critters, encountered a mysterious tribe and had many fur-raising adventures!
Data file

Moshling expert extraordinaire Snuffy Hookums is Buster Bumblechops' sidekick. After disappearing under mysterious circumstances, the intrepid Moshlingologist dramatically returned to Monstro City after 1,882 days on her own in the wild, quashing rumours that she had been eaten by a tribe of dangerous Moshlings somewhere near Mount Krakkablowa.

Moshling mastermind and garlic gourmand, Snuffy Hookums is Buster Bumblechop's trusty assistant. This fledgling Moshlingologist went missing for ages but now she's back in Monstro City!
Snuffy has had quite an eventful life so far. Whilst on a Moshling expedition with Buster, she was captured by a tribe of Pink Hoodoos who mistook her for the queen of KNDAYFLOZ. Snuffy managed to escape with the help of IGGY (and her sidekick flick move) but found herself completely lost in the process! She spent many Moshi moons adrift on Potion Ocean on a handmade raft. She survived by carefully rationing her supplies of pongy garlic Marshmallows, so perhaps it was lucky that the raft was only big enough for one!
Front Page News!
Snuffy made front page news and appeared on the Daily Growl when she dramatically returned to Monstro City.
Explorer
Getting lost on the Krakkablowa expedition turned Snuffy into a skilled explorer and she's helped Buster locate many new species of Moshlings.
SHH! Top Secret!
Snuffy is one of only a few monsters who know the location of Buster's hidden Moshling ranch.
Dance Disaster!
Snuffy's a great assistant but she's an awful sander. Newborn Performing Flappasauruses have more rhythm than her. That doesn't stop her from trying though.
KNDAY Queen!
KNDAYFLOZ is candyfloss to me, you and Sweet Tooth. It's the only thing Pink Hoodoos eat (and the reason why they are pink). The Hoodoos thought Snuffy's hair was a crown of fluffy candy, which is why they made her their queen!
Likes
Finding new Moshling species and exploring!

Upon the discovery of Woolly Pink Hoodoos
Retrieved from "https://moshimonsters.fandom.com/wiki/Snuffy_Hookums?oldid=263085"
Community content is available under CC-BY-SA unless otherwise noted.