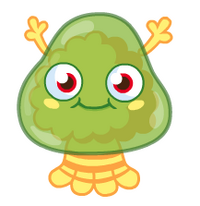 Keep your noms close and your tummy growling!

Shopkeeper of the Gross-ery Store

He appeared in Candy Catastrophe, where he showed the Super Moshis the back food storage of his store and the Candy Cane Caves.

Main
Snozzle Wobbleson started out his career as a Stock Monster at the Gross-ery Store. but everything he picked up slipped through his wobbly grip and made a splat-tastic mess everywhere! Luckily, Snozzle was soon given the more suitable job of cashier, which he loves. Except when he has to handle jelly, that is!
Wobbleson creations
Despite his busy day job, Snozzle still finds to invent monsterific new treats to sell. He cleverly concocted his own drink, "Essence of Gloop", and in honour of Growly Grub Day, sold his latest creations, Curry and Saffron flavoured Glump Cakes. Yum!
What a mess!
Snozzle doesn't like to think back to his messy time working in the stock room. He is much happier floating around the shop, serving all the hairy customers.
Data File
Hangout: Gross-ery Store
Catchphrase: "Snozzle stocks the lot!"
Likes: Wobbling contests, dodge ball
Often spotted: Snacking on Slopcorn
Notes

Snozzle Wobbleson started out as a Gross-ery Stock Monster, but everything kept slipping through his wobbly frame. He was soon promoted to cashier after dropping sixteen cartons of eggs and making a real mess of things. Snozzle loves his job and creating new and tasty treats!

Snozzle Wobbleson is often compared to a mitten-clad cauliflower squished in a bizarre kinda jar but you don't become chief cashier in the Gross-ery Store on looks alone.
You see, Snozzle got the job because he can juggle soggy splatsumas whilst mopping up Sludge Fudge spills faster than you can say 'unexpected item in the bagging area'. Plus, he can flit down an aisle in seconds.
C.L.O.N.C.atastrophe!
Poor Snozzle! He spends hours every day making sure his stockroom is super neat and tidy, and in Candy Catastrophe (Mission 4, Season 1), it was completely messed up by the gross Glumps. Luckily, the Super Moshis were on hand to help tidy it up!
Goo-pendous!
The main ingredient in most monster food is goo, and Snozzle likes to make his own. Why don't you have a go? Here's his secret recipe:

Put the cornflour and the food colouring into a bowl. Add a small amount of water and mix it all together with your hands.

Accompanying Elder Furi speech: "Snozzle's goo is very special. It will seem solid until you try to pick it up! Why don'y you try hitting it like a drum or rolling it into a ball? Remember, only monsters can eat goo!
Family ties
Snozzle comes from a long line of Wobblesons, but aside from his auntie (who sells yucky homemade snacks on a festival stall) the only relative Snozzle ever sees is his cousin Boggle, a custard pump attendant who lives near Whoop 'n' Holler Valley.
Likes
Stacking shelves and storeroom snoozes.
Dislikes
Self-service tills and fingerless gloves
Other
Hands on head? Sort of, because Snozzle's mitts are placed just above his eyes, so reaching for boxes of Shredded Feet is easy.

Snozzle is a jellyfish/squid-like creature with his body visible through his green translucent head, making him look like broccoli. He has four yellow and orange striped tentacles and two antlers. He has bright red eyes and a big smile with a light yellow blush.

Animated by Will Arbuckle

Retrieved from "https://moshimonsters.fandom.com/wiki/Snozzle_Wobbleson?oldid=271347"
Community content is available under CC-BY-SA unless otherwise noted.