Keep your headphones close and your hair under control.

Simon Growl, president, owner and founder of HighPants Studios[1], Talent Scout, and Producer is a significant character in Moshi Monsters and responsible for the Music Rox! album. He described himself as H.A.R.G.G. (Handsome All Around Good Guy), which is put emphasis on due to his near antagonistic behaviour and actions.

He appears as a judge in the Underground Disco and in various Super Moshi Missions.

He was tricked into "joining" C.L.O.N.C. in Season 1, not knowing they were planning on destroying Monstro City. Why exactly he even joined their ranks has never been explained.

Main
Blunt and grumpy Simon Growl is a fangtastic talent scout, but a mean judge, who likes to tell you exactly what the score is. Even if he doesn't his scary hair will show you how he really feels! Si lives in Growl Mansion, but spends most of his time in the studio, managing his record label HighPants Productions, and mingling with A-list celebs.
The real talent?
Not-so-simple Simon has often claimed to be the real writer of the best-selling music in Monstro City, rather than the gooperstars themselves. Maybe his success is going to his head? Either way, Simon definitely isn't afraid to give himself the top score!
Strike 1
Groaning Growl is by far the toughest judge on the panel at The Underground Disco. So you'd better watch your dance steps around him, or you'll be going as fast as you can say, "5, 6, 7, 8!"
Data File
Hangout: The Underground Disco
Catchphrase: "I'm an all-round genius."
Likes: Scowling and growling
Often spotted: Surrounded by paparazzi
Notes

On the rare occurrence that Simon Growl doesn't tell you what he really thinks, you can always look at his hair to find out how he feels. Despite being voted meanest judge three years in a row, Simon is still the greatest (and only!) talent scout in Monstro City.

Simon is a yellow monster featuring byzantium-coloured hair and eyebrows, crescent-shaped pupils and azure eyes. He is frequently seen wearing a black shirt with navy-blue jeans; a brief outline of his cheeks and chin is visible between many artworks and sketches of him. In his hair is his "companion", fittingly known as "Simon's Hair", who growls and gurgles from time to time throughout missions and throughout many of Simon's basic appearances.

Simon's hair is of a species known as a Wiggy Thing, which looks similar to a Tubby Huggishi or Pixel-Munching Snaffler. It has been described to be "the grumpiest hair around." They act similar to a dog. The exact relationship between the two is not really clear, but as seen in the trailer of Sandy Drain Shenanigans, the creature laughed when Simon got mildly insulted.

Simon Growl was a character in Season 1: Mission 5, in which you had to make him leave the room. Ironically, the lie that won him over was in fact "Cheryl Troll has a bigger mansion than you." To this he yelled out, "WHAT?!" And stormed out of his mansion in a huff, in order to either confront Cheryll or build a bigger mansion. If you looked closely, you would see a "green goo hand print" that your monster recognized. This may mean that Sweet Tooth was let in by Simon Growl, and that Sweet Tooth had used Holga - the Moshling used to steal Baby Rox's (formerly Lady GooGoo's) voice. This is a clue, and it may mean that Simon Growl is in C.L.O.N.C..

In Season 1: Mission 8, he hosted a Halloween Party, then the lights went out and Simon was gone (only his hair remained). After getting through the door on the upper floor, Simon can be seen tied up on a rope from the ceiling. After the Super Moshi saves him, he'll give you Gabby, which was originally his own phone. On the next mission, Dr. Strangeglove reveals that the whole party was a trap.

He helps you in the Season 2: Mission 1, along with Zack Binspin. He also appeared in Season 2: Mission 10. Simon Growl was included in the second part of The Googenheist Mission. He is a parody of real-life TV producer, Simon Cowell.

Simon is a judge at the Underground Disco, along with Roary Scrawl and Tyra Fangs. He always seems to vote the lowest number. It is thought he nearly always gives the lowest score similar to real judge Simon Cowell. In reality, is very picky and tends to be quite straight to the point, by saying exactly what he thinks of your performance.

He’s mean, he’s grumpy, who knows where he shops for his trousers, and he never has a good word to say about anyone, but when it comes to spotting talent, Simon Growl is the top Monstar! Hang-out. With the Growl Crowd and some of the Growl Factor might just rub off on you!

When it comes to top Moshi Music producer and H.A.R.G.G. Simon Growl, there are four things that everyone agrees on: 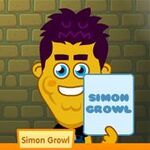