Shoney the Amazin' Blazin' Raisin is a Music Video that features in The Movie Soundtrack album, but not in the movie itself.

The song was released on the Moshi TV Studios on April 11, 2014, along with Shoney himself in your zoo. The date was confirmed on The Daily Growl on April 9, with a puzzle image of a scene from the video featuring Shoney and Bobbi SingSong. The next day, a fixed version of the image was shown.

In the video, Shoney sets everything on Monstro City on fire while monsters avoid him because he has been causing too much trouble.

The video opens with Sunny McFunny dressed suiting the occasion, as a breeze takes away Shoney's hat and he awakens. Time to hit the town! Monsters are having a laugh until they see a stream of fire excitedly coming their way. They run of immediately as Shoney waves at them, which he either finds amusing or he is oblivious to the fact that he is unwanted. He runs past Furi, who just got some ice cream, to set his fur on fire, much to Diavlo's delight. (Nobody was hurt in this process!) Shoney hits the disco and literally sets the dance floor on fire.

Next stop, Sandy Drain Hotel! After stealing Bobbi SingSong's drink and burning his seat, he jumps from the swimming pool plank, burned to a crisp, to jump into the arms of Poppet, who is then set ablaze. As the Moshlings gather to remain save in the waters (which Rocky tried too but he's not exactly one who would float), the only one remaining oblivious to the disaster that has passed is Blurp.

Ooh, the movie is in the cinema's! Better check that out too! Katsuma, delighted to have outrun Shoney, is not too happy to see him take seat next to him. After the very first scene, which is just the title, Shoney already cracks up and sets the theatre on fire. He offers everyone popcorn though. Oops, that's on fire now too. Several sceneries are shown that Shoney burned, including Buster Bumblechops who was likely hunting him. Nice underpants. Other sceneries are the Hoodoo temple, seen in Bungle in the Jungle, the ice-olation seen in Missing on a Star and the Moshi Fun Park.

ShiShi has finally finished putting out all the fires as Shoney makes sure that work is undone. Proud of his work, he thumbs himself up, but his fire is put out, even his own, when rainy weather comes to save the day. The video ends with Shoney setting the Moshling wallpaper and even his own title name on fire, causing him to fall. 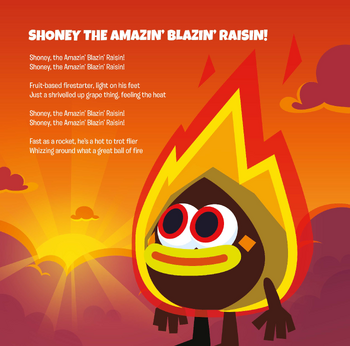 Fruit-based firestarter, light on his feet.
Just a shrivlled up grape thing, feeling the heat.

Fast as a rocket, he's a hot to trot flier
Whizzing Around Like A Great Ball of fire.

Add a photo to this gallery
Retrieved from "https://moshimonsters.fandom.com/wiki/Shoney_the_Amazin%27_Blazin%27_Raisin_(Song)?oldid=277175"
Community content is available under CC-BY-SA unless otherwise noted.