Shoney the Amazin' Blazin' Raisin is a Moshling in the Naughties set in Moshi Monsters. They are a flaming raisin known for accidentally setting things on fire.

Their own song, Shoney the Amazin' Blazin' Raisin, was released on Moshi Monsters: The Movie Soundtrack and after The Movie's was released with its own Music Video.

Great balls of fire? Not quite because these fiery fruit-based critters are actually Moshlings. Notorious for accidentally setting things on fire as they whoosh through Monstro City at breakneck speeds, Amazin' Blazin' Raisins are thought to ignite and take slight whenever they hear the phrase 'shrivelled grapes'. Twisted firestarters? You bet!

Buckets of sand and dingalinging alarms. 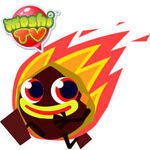 Retrieved from "https://moshimonsters.fandom.com/wiki/Shoney?oldid=272187"
Community content is available under CC-BY-SA unless otherwise noted.