Shimmy the Selfish Shellfish is an upcoming Moshling in Moshi Monsters. They are a shellfish. Shimmy often keeps sand in their mouth to produce magical rainbow pearls.

Shimmy did not see a release inside of the original online game. They instead made their obtainable debut in Moshi Monsters Egg Hunt where they can be obtained by daily egg hatching.

Have you ever tried saying ‘Selfish Shellfish’ really fast with a mouthful of soggy sand? If you have it’s probably because one of these silly Moshlings made you do it in exchange for some of the magical rainbow pearls it burps up every now and then.

Clamshell Cove but you will sometimes find these ocean-going Moshlings hiding in treasure chests. 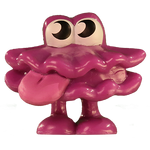 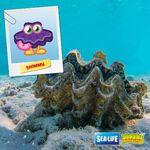 Retrieved from "https://moshimonsters.fandom.com/wiki/Shimmy?oldid=258927"
Community content is available under CC-BY-SA unless otherwise noted.