ShiShi the Sneezing Panda is an Ultra-rare Moshling in the Beasties set within the Moshi Monsters franchise. ShiShi is a panda obsessed with Monstrovision despite being allergic to it.

The music video Sneezing Channels is dedicated to them. In this video it is shown that ShiShi can change Monstrovision channels by sneezing.

Aah-choo! These eyelash-fluttering Moshlings are obsessed with watching Monstrovision, but it makes them sneeze. Lots. My research suggests that they might be allergic to all those itty-bitty pixels. Or maybe it's the wamwoo shoots they scoff by the bucket-load. I'm not really sure because I've never really had a proper conversation with one. I've tried, but when they're not glued to the screen, Sneezing Pandas are usually found fiddling with magical eye drops or scrunching up extra-soft tissues. Next time I spot one, I might just switch off whatever it is they are watching and observe what happens.

Aah-choo! These eyelash-fluttering Moshlings are obsessed with watching Monstrovision but it makes them sneeze. Lots. Experts think they are allergic to pixels. Or maybe it's the wamwoo shoots they scoff by the bucketload. When they're not glued to the screen, Sneezing Pandas are usually fiddling with magical eyedrops or scrunching up extra soft tissues.

Main
Sneezing Pandas like ShiShi are hopelessly hooked on Monstovision. Watching the screen so much makes them very well informed, but it also makes them sneeze! In fact, their noses are constantly snuffly. Some say it must be an allergic reaction to Monstrovision, but no one knows for sure.
Goggle-eyed critters
These Monstrovision-watching, channel-hopping Sneezies are happy to go anywhere there's a perfectly positioned seat in front of a big screen. When there's nothing good to watch, Sneezing Pandas busy themselves by scrunching up tissues, using refreshing eye drops and avoiding pepper!
A big night in
ShiShi likes nothing better than snuggling up on the sofa in front of the box, with a big tub of wamwoo shoots to nibble on and an extra-large pack of super-soft tissues at the ready!
Data File
Moshling type: Beasties
Species: Sneezing Panda
Habitat: Gogglebox Gulch
Beastie buddies: Jeepers, Burnie, Humphrey
Notes

Sneezing Pandas are so called because they sneeze whenever they watch Monstrovision. And they watch it a lot! It seems these poor Pandas are allergic to pixels, quite the opposite of Pixel-Munching Snafflers who can't get enough of them.
Being big TV watchers, it isn't surprising they come from Gogglebox Gulch, although these sniffling channel hoppers will live anywhere as long as they have a big screen to watch and a supply of extra-soft tissues for their noses. They are very fond of wamwoo shoots, which they scoff by the bucket load. But hold the pepper, please!

Originally from Gogglebox Gulch, these snuffly channel surfers will live anywhere as long as there is a big screen, comfy chair and a big remote control.

Pepper and "We interrupt this program!" newsflashes.

Open
Add a photo to this gallery

Moshi Monsters Mash Up: Party
Add a photo to this gallery 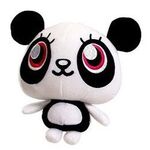 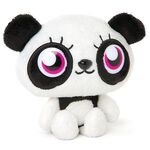 Trapped in Gummy!
Add a photo to this gallery 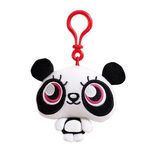 Retrieved from "https://moshimonsters.fandom.com/wiki/ShiShi?oldid=272185"
Community content is available under CC-BY-SA unless otherwise noted.