Shed the Welcoming Woodling is an uncommon Moshling in the Woodies set Moshi Monsters. Shed a porcupine wearing a top hat with overalls and spikey red hair. They are imaginative and invent things.

Their name was revealed in the 100% Moshlings magazine issue.

Shed did not see a release inside of the original online game. They instead made their obtainable debut in Moshi Monsters Egg Hunt where they can be obtained by daily egg hatching.

Welcoming Woodlings are famous for inventing the craziest things, from tartan paint and left-handed hammers to jam cardigans and custard floorboards. But there is more to these imaginative little Moshlings than mere brainpower because they also love holding wild parties in little garden sheds built from planks of dried elbow grease. 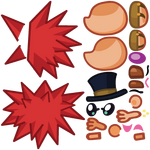 Shed's sprite sheet
Add a photo to this gallery

Retrieved from "https://moshimonsters.fandom.com/wiki/Shed?oldid=274255"
Community content is available under CC-BY-SA unless otherwise noted.