Scrumpy the Surreal Snooper is an uncommon Moshling in the Arties set. Scrumpy is a green apple detective who loves to solve mysteries, although the outcome of solving said mystery can turn quite bizarre.

Say 'allo to the curious little Moshlings who just love solving mysteries and sticking their hyper-sensitive hooters into other Moshis' business. Genuinely surreal they also enjoy riding pasta unicycles, wearing meat shoes on their heads and wrapping kippers around their waists. Bonkers!

Say 'allo to the curious little Moshlings who just love solving mysteries, investigating strange goings-on and sticking their hyper-sensitive hooters into other Moshis’ business. I once hired several Surreal Snoopers to look into the disappearance of my Great Uncle Furbert. What a waste of time that was! I soon discovered that these artful Moshlings really are surreal, when I caught one riding around my ranch on a pasta unicycle with a meat shoe on its head and a string of kippers round its waist. Bonkers!

Habitat
Based in and around Strudel Station, but Surreal Snoopers like to nose around almost any area of the Moshi world.[1]
Personality
Nosy, surreal, officious.
Likes
The smell of oil paint and flash photography.
Dislikes
Pips and Ponies.

Main
Surreal Snoopers like Scrumpy fulfil their curious natures by sneaking around the Moshi world, poking and prying into everyone's business! These nosy parkers and their sensitive snozzles are based in and around Strudel Station, but are often found out and about investigating mysteries.
One of a kind
When they're not sleuthing, Surreal Snoopers are utterly odd and exceedingly surreal! The creative critters love the smell of oil and paint. If that isn't strange enough, they ride around on pasta unicycles, and are often seen wearing meat shoes on their heads and wrapping kippers around their waists!
Inspector Scrumpy
Scrumpy thinks his moustache and hat make the perfect disguise. In fact, the odd-looking Moshling looks incredinly conspicuous as he wanders the streets of Monstro City!
Data file

Say 'allo to the curious little Moshlings who just love solving mysteries and sticking their hyper-sensitive hooters into other Moshis' business. Genuinely surreal they also enjoy riding pasta unicycles, wearing meat shoes on their heads and wrapping kippers around their waists. Bonkers!

When they're not nosing around Monstro City, solving mysteries and investigating strange goings-on, Surreal Snoopers really can be found doing the strangest things. From riding pasta unicycles, to wearing shoes on their heads, they're surreal by nature and not just by name! 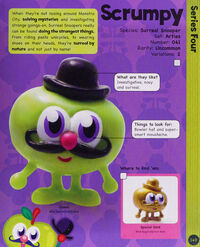 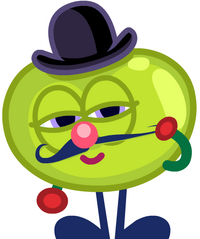 Scrumpy is a Monstro City-renowned detective and self-proclaimed artistic connoisseur, Scrumpy stars as the brains behind the solving of The Googenheist, in which even Elder Furi comments about how good a detective he really is.

Scrumpy has three figures: a normal and a gold figure respectively in Series 4, as well as an exclusive wintry Food Factory Cool Collection-themed figure. Additionally, he dips slightly into other areas, such as in the Uptown Fifi music video or the Read it yourself: Furi on Music Island book. Add this to his three Moshi Monsters Mash Up appearances, in Code Breakers, Moshling Madness, and Party.

Scrumpy is a very passionate albeit serious character. His work is always something he prides himself on, and generally will go by his own agenda, trusting himself as the ultimate expert of his speciality. For example, his moustache and hat - something he is rarely seen without - are worn with the purpose of disguise, despite being entirely counter-productive, what with them making him even more conspicuous - this is something he thinks will work and he wholeheartedly trusts himself with it, despite it not working at all the way he wants it to. The fact he thinks a bowler hat and handlebar moustache will make him blend in are indications he is almost an aged character - after all, these two examples of appearance are not at all modern and are by most means vintage. His formal attitude is further shown by his liking of Fifi in Uptown Fifi, who is demonstrated to be a rather posh and formal character - this is the kind of character he looks for to spend time with.

Additionally, he can be quite articulate and creative - his artistic side seems to form an equilibrium with his other, more formal side, without significantly impacting his work. This is demonstrated with his home-built contraptions of innovation like the Masked Monstro Decode shown in The Googenheist - the very name of this mission, in fact, is drawn from the imaginative, intelligent side of his that formulated such name.

He is avid about art. He is knowledgeable about things concerning this, like how Simon Growl would have an art party and had zeal on the mere topic of it.

Scrumpy speaks in a French accent, with a few French words, such as "la", mixed in.[2]

Scrumpy is a bipedal Moshling with a lime green-tinted apple for a body. With a modest matte black bowler hat sitting comfily above its head, and a handlebar moustache beneath a cherry-like nose, Scrumpy has faded purple eyes and is rarely seen without a smile, even during times of formality, such as during detective bouts. Such bowler hat can be removed to reveal a small stalk of similar height thereto. Scrumpy has thin arms with circular red hands, and feet covered in shoes with soft soles, such feature being tailored toward said snoops.

There is only really one mission in which Scrumpy has a major and defining appearance in, and it is the aforementioned Googenheist (in all three parts thereof). During this, the Googenheim had gone missing, and Elder Furi suggests the player to see Scrumpy, "the greatest detective in all of Monstro City", about such matter. When approached, he is seen looking curious by the site of the crime scene, before melodramatically and with a hint of self-pride declaring the situation a "Googenheist". He asks the player to assist him on finding clues, which are used to find the culprit of such crime, before Scrumpy reveals his self-built Masked Monstro Decode device to discover the true face of the criminal mastermind behind the daring display. Upon discovery of the identity, Raffles, a disapproving Scrumpy describes him as a ruffian, before demonstrating his knowledge of the character in the fact that this is not his usual forte, and that Raffles enjoys art. And, with that note, he reminds himself of Simon Growl's art party with a hint of enthusiasm. There are a few other segments of Part 1, but generally they are irrelevant.

In order to lure Raffles, Scrumpy sets a trap in the form of Simon Growl's art masterpiece, a rather garish display of self-pride in a crystallised statue of himself. Even when unveiled, Scrumpy declares that all in the room must leave in order to perfect the plan. When the statue emerges to be a fake, the Super Moshi assistant of Scrumpy's takes its place, with the detective running into hiding. Scrumpy had done it: Raffles was lured. The part concludes.

Part 3 opens up with an interrogation of Raffles, carried out by Scrumpy. In this, the location of the Googenheim emerges to be Crabby Cove - with such knowledge, Scrumpy releases Raffles. Evidently, Scrumpy has the power of formal interrogation. This is Scrumpy's final main appearance - although he does appear in the background for the remainder of the segment - as the rest of the mission is mostly Scrumpy's Super Moshi sidekick carrying out his bidding.

Has respect for Scrumpy and praises him, calling him the "greatest detective in Monstro City".

Subordinates; abidingly do his bidding. Scrumpy appreciates this and, in return, gives enthusiastic praise. Some of this bidding, even, might seem quite daunting at first, showing faith in Scrumpy. For example, Scrumpy asks the player to lure Raffles, who by this point had been built up to be quite the dangerous criminal (they possess a crowbar, after all) - but without acquiescence, the player follows.

Disapprovingly lambastes; Raffles is his number one suspect for the carrying out of the Googenheist and is thereby surprised when Raffles emerges to have been innocent. Scrumpy is surprised when this happens to be the case. The interrogation he asked his subordinate Super Moshi to do was clearly carried out because he thought Raffles was the mastermind behind the crime and therefore had the knowledge behind the Googenheim's disappearance, as opposed to anything else.

Scrumpy presents a Fablo Fiasco painting to her. He is quickly turned down by her condescending attitude.

Roary Scrawl, who echoes the people of Monstro City, refers to Scrumpy as an "ace detective".[2]

In Season 3: Mission 3: The Googenheist

Retrieved from "https://moshimonsters.fandom.com/wiki/Scrumpy?oldid=286305"
Community content is available under CC-BY-SA unless otherwise noted.