Scamp the Froggie Doggie is an Ultra Rare Moshling in the Puppies set. They cannot swim and use their frog headgear to keep afloat. Scamp often makes frog sounds.

Ever wondered why a cute little puppy want to boing around wearing a rubbery frog suit? Me too, but Froggie Doggies are too busy yelling 'ribbit' to answer silly questions. I keep several in my private zoo and I still can't work it out. Maybe there's something in the water? If you know different, feel free to get in touch. Oh yes, and if you fancy catching one of the jolly pooches, just tug on its pink bow. It deflates that bizarre bouncy outfit in seconds. Ftsssst! If that doesn't work, try popping it with a pin. Bang!!!

Ever wonder why a cute little puppy want to boing around wearing a rubbery frog suit? Of course you have, but Froggie Doggies are too busy yelling 'ribbit' to answer silly questions. Well, they think they are frogs. The best way to catch one of these jolly pooches is to tug on its pink bow because it will deflate its bizarre bouncy outfit. If that doesn't work try popping it with a pin. POP!

Main
Scamp and the rest of the Froggie Doggie pack are dogs who think they are frogs! Dressed in frog costumes, the funny Puppies swap a dog's life for pond life and barking for ribbitting. These deluded Doggies are the happiest boinging along and reaming about fairy princesses, however confusing it may seem to seem to everyone else!
Pop goes the Frog!
The best way to get your paws on one of these happy hounds is by tugging on their pretty pink bows. This will make their rubbery Froggie outfit deflate! You can also make these Puppies' costumes pop with a pin. So, the Froggie Doggies are somewhat scared of knitting needles!
Up the creek!
Scamp likes to go to Lillypad Lake and Croak Creek, but the loopy-loo can't actually swim - not even doggie paddle! Fortunately, Babs is there to give the daft Doggie a row in her boat.
Data File
Moshling type: Puppies
Species: Froggie Doggie
Habitat: Lillypad Lake and Croak Creek
Puppie pals: Fifi, McNulty, White Fang
Notes

Moshlings can be strange creatures and none more so than the Froggie Doggies. They are dogs who like to dress up as frogs. Hmmm. Naturally, they hang out at Lillypad Lake and Croak Creek, where they leap about calling out, "Ribbit! Ribbit!".
The worst thing that can happen to a Froggie Doggie is to fall in the water, because they can't swim! These pad-hopping pooches also dislike people messing with their bows because this deflates their bizarre bouncy outfits. This may also explain why they fear knitting needles so much!

These dogs think they're frogs so they often gather at Lillypad Lake and Croak Creek – bad idea as they can't swim. Ribbit! 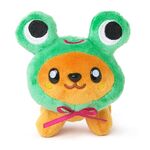 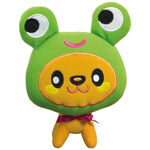 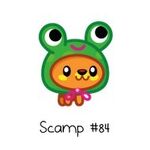 Retrieved from "https://moshimonsters.fandom.com/wiki/Scamp?oldid=267059"
Community content is available under CC-BY-SA unless otherwise noted.