The Monstrous Biographies are all written by her in which she unraffles the past of characters, which aside writing seems to be a great skill of hers. As of now, she has written about Captain Buck E. Barnacle, Dr. Strangeglove and Zack Binspin.

She is a rather humorous individual but also a "straight man" in conversations.

Main
Friendly but pushy Ruby Scribblez began her career writing dull labels for Yukea, the furniture store. Luckily, she soon climbed the wobbly work ladder to become a roving reporter for Shrillboard Magazine, the author for many monsterific celebrity biographies, and a top-rated talk show host.
Monstrous ambition
Miss Scribblez writes a clawsome blog, Ruby's Review for The Daily Growl, in which she reviews all the latest games and toys. She also created the fanzine for the band Hairosniff and is rumoured to have dated the group's lead singer, Screech McPiehole.
Binspin's got her head spinning!
Ruby simply adores pop solo gooperstar Zack Binspin. She will find any excuse to interview him and stare longingly into his starry eyes!
Data file
Hangout: Wherever Zack Binspin is (or as nearby as possible)
Catchphrase: "Write your way to the top!"
Likes: Shopping for new trends, bargain hunting
Often Spotted: Scribbling away
Notes

It says in Moshi Monsters Magazine (Issue 26) that she might have dated Screech McPiehole, Hairosniff's lead singer.

She is colleagues with Roary Scrawl (interviewers and bloggers) and Simon Growl (showbiz). She has made paparazzi-like pictures of Tyra Fangs in a bathing suit, while Tyra was on vacation with Roary Scrawl. Their relationship is a bit unclear.

She was shown to hang with Buster Bumblechops when Roary tried to catch up to him about the Food Factory.

It is stated that she is friends with Poppet in the I Heart Poppet book. 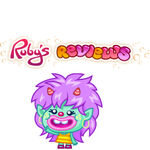 Add a photo to this gallery
Retrieved from "https://moshimonsters.fandom.com/wiki/Ruby_Scribblez?oldid=248542"
Community content is available under CC-BY-SA unless otherwise noted.