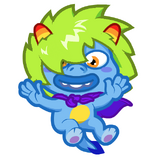 None
Roy G. Biv, also formatted Roy G Biv, is a character who comes to Monstro City once a year in April for the occasion sharing his namesake, Roy G. Biv Day (although his day has not been noted since 2013 in The Daily Growl).

He is known to have several tricks but needs names for them. Through The Daily Growl, Roary Scrawl always asks readers to submit their own trick name suggestions.

His name is parodying R.O.Y.G.B.I.V., an acronym for the colours of the rainbow: red, orange, yellow, green, blue, indigo and violet.

Main
Vividly bright Roy G. Biv is a multicoloured monster and professional and Rainbow Rider, who takes his name from the first letter of each of the colours of the rainbow. This totally rad hero is also Monstro City's connoisseur on Colossal Cloud Cruising and the authority on all things bright and colourful.
Roy G. Biv Day
Magical Roy only comes to Monstro City once a year on what has become Roy G. Biv Day. He spends the day making sure that there will be rainbows all year round.
Bright idea
Rainbow master Roy likes to blend in with his surroundings by sporting as many colours as monstrously possible! He dyes his hair green, has bright blue skin and regularly dips his horns in rainbow paint to keep them looking nice and stripy. Well, this technicolour whizz has got me to look the part!
Data file
Hangout: The skies
Catchphrase: "That's, like, totally colourful, dude!"
Likes: Sky surfing, riding rainbows, going to Colossal Cloud Cruising conventions
Spotted: Once a year above Monstro City
Notes

A professional Rainbow Rider, an expert Sky Surfer, and a Colossal Cloud Cruiser, Roy G. Biv is a totally rad and colourful dude. He only comes to Monstro City once a year on Roy G. Biv Day to make sure there are rainbows all year round (without the rain...it's MAGIC!). Watch out for his Funky Fuchsia Fakie!

April: Roy G Biv Day
Roy G Biv is a professional Rainbow Rider, an expert Sky Surfer and a Colossal Cloud Cruiser! He is totally cool and colourful, and only graves Monstro City with his presence once a year on Roy G Biv Day. He comes to our shores to make sure there are rainbows over Monstro City all year round, even without any rain!

Celebrate Roy G Biv Day, by surrounding yourself in colour and rainbow-dellic radness! Wear your brightest clothes, buy a Rainbow Stand to get all the colours of the rainbow all of the time, find the end of the rainbow by sitting on a Rainbow Chair (the end is where you are sitting, of course) , buy yourself a Rainbow Painting or paint yourself all kinds of colours. Finally, make everything technicolour funtastic by sporting a pair of Rainbow Shades!

Top Tip: Remember to watch out for Roy G Biv's FunkyFuchsiaFakie too!

Roary Scrawl of The Daily Growl, in which Biv debuted to the Moshi Monsters community, has interviewed him once and given fans the opportunity to name his sky-based tricks. It is unknown why 2009 did not document this holiday, but 2012's justification was likely due to / made up by Biv's appearance in the annual of such year. After 2013, the holiday was not noted most probably due to the franchise and Daily Growl's decline.

Interview
RS: What do you think of the latest competition?
RGB: Dude, I checked out everybody's rainbow rooms, and dude, they were rad. Jenny's rainbow sculpture had eyeballs, which were totally stellar. 06djenkinsc's room has a colorful corner that's boss maximum. Purplishstar used her glow bugs for a tubular twist.
RS: Gnarly. Since this is your holiday, would you pick the winners?
RGB: I think everybody who posted to the contest blog should win, that's how stoked I am.
RS: What an historic event for Monstro City! Shall we celebrate with lunch at the Gross-ery?
RGB: For sure. I was headed there next, bro, to get some chow. Thought I might check out what's shakin' over at EN-GEN first, though.
RS: Superb-a-tude. Let's go, bro.

Roy's first mention in the franchise and, naturally, on The Daily Growl. Demonstrates that Biv can create double rainbows, as evidenced by "as we walked to the Gross-ery, we saw a double rainbow".

Asks the readers to name Biv's tricks, and reveals that he comes to Monstro City purely to ensure that the city has rainbows all years round (though without rain, hence why rain is never seen on this holiday or hardly ever in Monstro City, for that matter). The nature of these tricks were revealed to be snow and skateboard-based (the trick names had this clause), likely a reference to the fact that Biv is a professional Rainbow Rider and Sky Surfer. Unofficial answers included:

Remarkably similar to 2010's post, though note that this one's naming scheme had the restriction of the full name including a colour, and states that Monstro City is brighter on this day. The above tricks were also included, interestingly identical; it is likely that this post was copied and a new naming scheme was tailored around the image that was already there. 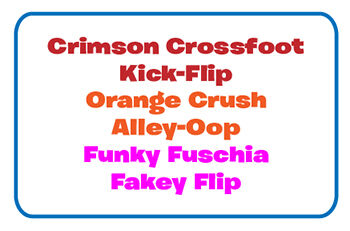