Roxy the Precious Prism/Priceless Prism is an ultra-rare Moshling in the Secrets set within the Moshi Monsters franchise. Roxy is a Rox that is so fragile and priceless they are afraid to touch anything in fear they will shatter.

Roxy was first featured in The Daily Growl on November 15, 2010.

Deep beneath the Twinkly-Dink mines of Kaleido Island lies a rich seam of powerful Rox. But Precious Prisms don't hang out down there. It's far too obvious! Plus they might bump into ol' Buster diggin' for sparkly stuff. These secret Moshlings are so priceless they're scared to lay a finger on anything (including themselves!) in case they leave smudges. That's why they wear silly white gloves 24/7. But so would you, if you were made of 100% pure Rox. The only way to catch 'em is to get diggin'. Handle with care; they often shatter into squillions of pieces. Zzing!

Deep beneath the Twinkly-Dink mines lays a rich seam of Rox. But Precious Prisms don't hang out there. It's too obvious! These super Ultra Rare Moshlings are so priceless they're scared to lay a finger on anything (including themselves!) in case they leave smudges, hence the silly white gloves. Crazier still, they often shatter into squillions of pieces. Handle with care!

Main
Precious Prisms like Roxy are priceless gems and secretive souls. They are very particular, and wear white gloves, so they don't mark or smudge anything - especially their own very valuable selves! Prisms are extremely fussy, which makes sense when you realise that they could shatter into tiny pieces at any moment!
Squeaky clean
These delightfully delicate gems love lounging in luxurious vinegar baths and buffing themselves on polishing machines until they gleam. They absolutely loathe shiny-object-stealing magpies, and spotting fuzzy fingerprints on anything, however faint!
Great getaway
Prisms may be more than a little bit brittle, but they are very quick on their dainty feet. When chased by enthusiastic Moshling Collector Buster Bumblechops, Roxy can easily give him a run for his money!
Data File
Moshling type: Secrets
Species: Precious Prism
Habitat: Top Secret
Secret friend: Blingo
Notes

There's a reason these Moshlings are ultra-rare - no one knows where they come from! Some used to think that Precious Prisms came from the Twinkly-Dink mines but that was just a rumour.
These secretive gems aren't seen that much, as they hide away, afraid of getting smudges on their beautiful, shiny facets. They're so scared of this, in fact, they even wear gloves themselves! But there's a good reason for their fears: they are so fragile they can easily shatter into sparkly little pieces!

I once spotted a Precious Prism during the Great Rox Rush of Eleventy Seven, but I can't remember where. 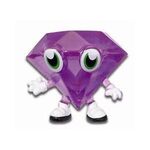 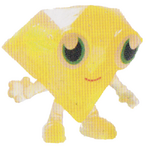 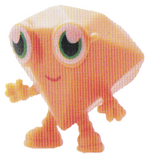 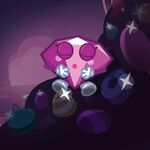 Retrieved from "https://moshimonsters.fandom.com/wiki/Roxy?oldid=264920"
Community content is available under CC-BY-SA unless otherwise noted.