Roscoe the Shady Sheriffis a common Moshling in Moshi Monsters Egg Hunt, who is a sheriff.

Roscoe did not see a release inside of the original online game. They instead made their obtainable debut in Moshi Monsters Egg Hunt where they can be obtained by daily egg hatching.

Never get arrested by a Shady Sheriff because these rootin' tootin' Moshlings have a reputation for demanding Rox in exchange for light jail terms. Not that they have authority in the world of Moshi, they just like galloping on hobby horses and pretending they run the place. Yee-hah!

Pony rustlers and Moshlings with no name. 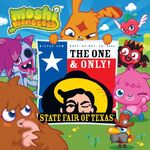 Retrieved from "https://moshimonsters.fandom.com/wiki/Roscoe?oldid=272172"
Community content is available under CC-BY-SA unless otherwise noted.