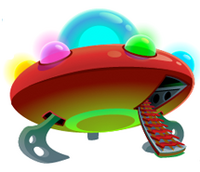 Rhapsody 2 is the name of the Zoshlings' ship, maintained by Captain Squirk.

The ship crashlanded on Music Island, during the events of Super Weapon Showdown. The Rhapsody 2 was discovered in the Unknown Zone in Close Encounters of the Zoshi Kind by the The Super Moshis.

This cool, hi-tech UFO crash-landed on Music Island after a close encounter of the sun-smashing kind. Inside were Captain Squirk and his Zoshling crew, The Rhapsody 2 lay wrecked in a clearing in the revered Unknown Zone until the Super Moshis were able to help fix it.

The Rhapsody 2 heavily features in Masters of the Swooniverse where the mission takes place within the ship.

All rooms are connected to the Bridge, but as the door of the Engine Room was locked, you have to use an alternative route. The blueprint of the ships revealed the ships interior and the connection between the rooms. (Only those you are able to enter) 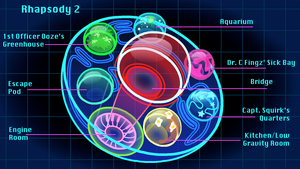 Splutnik's room, as the engineer of the ship. The door is designed to look like Splutnik's face. The engines are started by 4 pipelike devices each crew member must take place on. The Super Moshi had to perform a tune in repetition. This implies the ship cannot leave without a 5th member helping.

"It needs some work"

First Officer Ooze's room, where its function seems to be providing food by farming plants.

Captain Squirk's room, which seems to be merely for entertainment. To open the door to the Bridge, which is modelled as a Tetris game in visuals and sound, three terminal must be reset and actived again.

To start him up, you have to insert his Humor Chip, shaped like a bowtie. He seems to have lost his memory after being reset so you must finish his jokes to complete his stand up comedy retrieval. For some reason, his design features briefs.

A game of Memory or where you need to match up a total of four pairs.

A boxing game, "Magic Hero Squirk VS Gamappa", featuring Captain Squirk boxing against Gamappa (a Godzilla parody). There game is simply a buttonbash game with no possibility to lose as Gamappa does not fight back.

Inside
Add a photo to this gallery
Retrieved from "https://moshimonsters.fandom.com/wiki/Rhapsody_2?oldid=265744"
Community content is available under CC-BY-SA unless otherwise noted.