Raffy the Higgledy Hypnotiser is an Ultra-Rare Moshling in the Swindilies set in Moshi Monsters, who was designed based on a creation from a boy named Raffy. They perform by hypnotising others to do trivial things for a living.

Raffy is unobtainable as only the person who created them can obtain them.

Long ago, Higgledy Hypnotisers would use their enchanted hypno-clocks to swindle rich monsters out of all their Rox. Nowadays these swirly-eyed scoundrels earn a living performing to passers-by, persuading hapless volunteers to eat raw oobla doobla and do the splits every time they whisper 'flummadiddledee'.

Like Wonky Wizards, Higgledy Hypnotisers are said to come from the mystical land of Alakazam, but they enjoy entertaining shoppers on Sludge Street. 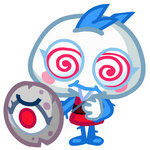 Retrieved from "https://moshimonsters.fandom.com/wiki/Raffy?oldid=272165"
Community content is available under CC-BY-SA unless otherwise noted.