Posy the Forgetful Fairy is an ultra-rare Moshling in the Sparklies set in Moshi Monsters. They are a pink fairy with green hair, blue wings, a yellow bow and a purple outfit. Posy can cast powerful spells but often forget simple and trivial things.

Readers have found Posy's name and design in Issue #33 of the Moshi Monsters Magazine, where they featured as a sticker.

Posy did not see a release inside of the original online game. They instead made their obtainable debut in Moshi Monsters Egg Hunt where players can obtain them by daily egg hatching.

If you see a Forgetful Fairy fluttering around in circles it’s probably trying to remember the way home. You see these cute little Moshlings can cast powerful spells, sprinkle fairy dust and even freeze time, but they are forever forgetting the simplest things, leaving the bath running and losing their keys.

Sparkle Nook near Copperfield Canyon but some Forgetful Fairies are attracted to beanstalk sap. 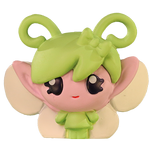 Add a photo to this gallery
Retrieved from "https://moshimonsters.fandom.com/wiki/Posy?oldid=287659"
Community content is available under CC-BY-SA unless otherwise noted.