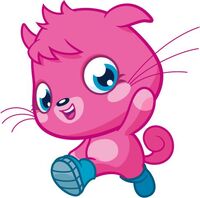 Poppets are the second most popular species of monster. The default Poppet is pink with blue eyes and blue boots.

Poppets are soft cat-like monsters. They have large heads with a small agile body. Their design uses many round features such as round paws, eyes and body. They seem to have a liking for footwear (especially boots!), Juno being the only one shown without. With the introduction of The Poppeteers, Poppet anatomy is shown to vary.

Appeared exclusively in The Lost Treasure of Umba Umba! as a member of the search team. She is fluent in millions of Moshi languages!

"Pinky" was a name given to Poppet in the early installations of comic stories to maintain neutrality to the species. She is most prominent in earlier issues of the Moshi Monsters Magazine.

Hazelbunny is a monster owner in Moshi Monsters and was 2008's Top Monster, a prize that was granted by Tyra Fangs. Displayed in her room, is a unique sign saying MC NTM Winner 2008. She has over 250,000 visits and is an A rated MonSTAR.

Rainbow is the Monster owned by "Cutiegirl15033". Rainbow is a dark brown Poppet wearing the Green Shades and the Frilly White Dress.

Cutegirl15033 won a contest on The Daily Growl where the prize was to be featured on a Series 2 Mash Up card.

Poppets are bashful, huggalicious little critters, but when no one's around, they just love to get down! It's what their titchy paws and boots were made for!

Main
Loveable, huggalicious Poppets appear to be timid tots who hate attention, but when nobody can see them, they release their inner boogie! Underneath their shy exterior, these little cuties love nothing more than making music and strutting their furry stuff on the dance floor!
Musical Moshis
"I Heart Moshlings" is Poppet's popilicious pop song on the  Music Rox album. The video features a Poppet who loves Moshlings so much she wants to attract as many of the little critters as possible - how sweet!
Fancy dress
Poppets love dressing up in cute costumes and partying. But when it comes to Hallowe'en, they find it really hard to look scary, as they're just too adorable!
Data File
Habitat: Monstro City (and anywhere in the Moshi World)
Poppet phrases: "Aww, shucks!", "Let's boogie!", "Quit staring!"
Monster mates: Diavlo, Furi, Katsuma, Luvli, Zommer
Notes

A "*" indicates that the line can be said regardless of the Poppet's Happiness Points.

Retrieved from "https://moshimonsters.fandom.com/wiki/Poppets?oldid=270760"
Community content is available under CC-BY-SA unless otherwise noted.