Podge is a red Glump, who was named by a player named cobyandfrankie10, with a frazzled piece of orange hair on his head and two big eyes.

Main
Poingy-boingy Podge pounds the streets of Monstro City looking for Moshlings to lick up, quite literally! This Glump likes nothing better than using his long and twisty, sticky tongue as a large Lumpy Lasso to whip up unsuspecting Moshling victims. Poor little licked critters!
Bouncing ball
When he's on a monstrous mission, Podge bounces along like a super-fast bouncy ball. Watch out if you happen to be in this nasty Glump's perilous path!
Fiendish features
Rounding up Moshlings like a cowboy is sour-faced Podge's favourite pastime. But in his rare spare time he likes perfecting his criminal C.L.O.N.C. look by using gloopy hair gel to spike his orange hair.
Data file
Location: Top Secret
Job: C.L.O.N.C. minion
Features: Round, red and podgy, with a smaller-than-average Glump mouth
Notes

Quick, run! Podge is boinging along Main Street – and that means you might get caught in a Lumpy Lasso! It’s true because Podge has a super long icky-sticky tongue – ideal for rounding up poor little Moshlings!

With Podge around, there's danger of ending up in a tangle of tacky tongue. This bouncing Glump has a super-long lasso in his mouth and he knows how to use it!

As a Glump-O-Lantern
Add a photo to this gallery 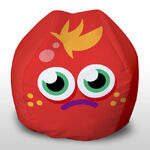 Retrieved from "https://moshimonsters.fandom.com/wiki/Podge?oldid=261000"
Community content is available under CC-BY-SA unless otherwise noted.