Pocito the Mini Mangler is an Ultra-Rare Moshling in the Sporties. They love wrestling and refuse to take their mask off.

They made their debut in Season 2: Mission 4 joining in Cirque Du BonBon (as a cannonball actor). Using a rigged hammer, you cheat yourself into getting the highscore of the high striker, which Pocito challenged you to if you wanted their aid.

In Somewhere Clover the Rainbow, you have to do this a second time and somehow still have the rigged hammer. Upon winning again, Pocito cries out "Not again!" and hands over the item you needed.

Tremendously strong and super elasticky, Mini Manglers are the mysterious masked Moshlings who can’t stop wrestling. If you find one practising the latest eye-watering moves do not disturb or you might find yourself in a spinning headlock with a full-nelson fajita in your face. Yuck!

Tremendously strong and super elasticky, Mini Manglers are the mysterious masked Moshlings who can't stop wrestling. If you find one practicing the latest eye-watering moves do not disturb or you might find yourself in a spinning headlock. I recently asked a Mini Mangler to remove it's mask for a photo - bad idea as it proceeded to perform a body avalanche on my camera before putting me in a short-arm scissorlock. I couldn't tie my shoelaces for a week! The Mini Mangler thought it was hilarious and celebrated by rubbing a full-nelson fajita in my face.

Main
Pocito and the rest of the wrestling-obsessed Mini Manglers come from a secret training camp in the giant haystacks of El Astico Ranch, called the Atomic Slambuster. These super-strong Sporties are masters of countless clawsome wrestling moves, including the Full-Nelson Fajita and Spinning Headlock - ouch!
Fighting face
Mini Manglers are incredibly stretchy and flexible, helping them beat their oppoments with ease. But underneath all their grappling garb and brawling bravado, these masked Moshlings are very secretive souls. In their time-outs, they often like to nibble on nachos for duelling fuel and to cover themselves in talcum powder.
All fired up!
Athletic Pocito is a very brave Mini Mangler Moshling, who loves entertaining and putting on a fighting performance, even if it means turning into a critter cannonball!
Data File
Moshling type: Sporties
Species: Mini Mangler
Habitat: The Atomic Slambuster
Sportie sidekick: Rooby
Notes

Tremendously strong and super elasticky, Mini Manglers are the mysterious masked Moshlings who can’t stop wrestling. If you find one practising the latest eye-watering moves do not disturb or you might find yourself in a spinning headlock with a full-nelson fajita in your face. Yuck!

Theses mysterious masked Moshlings just can't stop wrestling! They train at a secret training camp near the giant haystacs of El Astico Ranch, but don't disturb their fun or you might find yourself in a spinning headlock or a short-arm scissorlock. 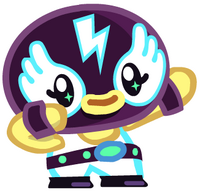 Pocito debuts in Season 2: Mission 4: Big Top Ballyhoo as one of the circus's performers. Monsters from all around come to see Picante Pocito launch himself out of a cannon. Super Moshi does not know of him as usual which surprises prideful Pocito. He is found at back stage next to his caravan, parked next to Candy the Clown's caravan, where he is working out before his performance.
Pocito is very fond of Cherry Bomb and requests Super Moshi to get one of those Cherry Bomb Plushies from the Fun Fair Shop in return of granting access to the big tent.


After having seen his show, Pocito stands outside the tent and is approached by Super Moshi to compliment him. He states it is the best thing the circus has to offer as even the Test Your Strength game is rigged, which has his name on the leaderboard on the first, second and third place. Super Moshi offers to fix it and Pocito suggests to find something sticky, like the goo trail Clumps leave behind, and something heavy, like his barbells he left backstage.
As per Pocito's suggestion to drop a weight on the strength tester Super Moshi successfully cheats their way to the highscore of the Leadingboard. Pocito, who has never been beaten at his score, is astounded by Super Moshi's supposed strength and has earned his respect, which Pocito hopes to earn back from Super Moshi as well.
After Zoshlingo's show, Super Moshi figures Pocito can help unmasking Candy the Clown. Pocito reacts with defending their colleague but believes Super Moshi upon stating it is actually Sweet Tooth in disguise.

Pocito is glad to help Super Moshi and states they would need a fuse and fire. Pocito happens to have seen a REAL Cherry Bomb among the plushies and also that "a fiery character" Burnie was stuck in Quack Attack. Upon gathering everyone, you commence the plan of launching Pocito into Candy, who's identity is revealed by losing their Candy the Clown attributes. Sweet Tooth makes their escape and Pocito can be collected as a Moshlings for your zoo.

In Music Island Missions: C.L.O.N.C. Strikes Back, Pocito demands a total of six plushies, one per Super Moshi. He eventually only gets five of them, but not point is made of that. Attempting to give more than one plushy to Pocito in the Mission, as you can win unlimited, will lead him to state one is plenty.
One of the Plushies at the Fun Fair is the real Cherry Bomb sitting between them. Pulling them out will make ask Super Moshi ask what they are doing there. There is no response or interaction with Cherry Bomb and they remain standing in front of the shop. You later need them to be the fuse and fuel for the cannon Pocito suggested to use to launch himself into Candy the Clown.

In Somewhere Clover the Rainbow, O'Really sends you of to fetch the green item, the Gooey Green Beanstalk Beans, which he assumes Pocito has. Upon arriving at Cirque Du Moshi - which Pocito states is closed for now - Pocito assumes Super Moshi is there to challenge him again in the Test Your Strength leaderboard. Super Moshi wins again by the same cheat as before; dropping a dumbbell on it, and Pocito shouts out "NOOO! Not again!" in devastation. He hands the beans over stating they keep him strong.

Music Island Missions: C.L.O.N.C. Strikes Back
Pocito has tremendous confidence and a fitting ego but does require some validation thereof.
He has a strong commitment to the sanctity of the mask as he believes everyone has something to hide.
He does not like the Super Moshis trying to get him to "unmask" Candy the Clown, aka Sweet Tooth, and initially leaves them to fend for their own.
After ringing the High Striker bell, Pocito comes to witness his leaderboard drop and the Clumps come out to see who won at their rigged game. Upon seeing the Supers fight like Musky Huskies (a species he respects) he agrees to help them, even it that involves exposing Sweet Tooth. Upon this exposure, Pocito remained speaking of/addressing them as "Candy" and "Zoshlingo".

In the toyline of The Magnificent Moshi Circus, Pocito is obviously included but is given a confusing position. Peppy has take over the Stuntman role, specifically the one with the helmet and the canon, which was his position. Lummox takes on the Strongman role, which was the only possible second role Pocito could fill in. Pocito's prevous colleague Dr C. Fingz joins him once more but now as a clown instead of a clairvoyant.

Pocito is a person all about respect, the sanctity of the mask and "the second identity" which befits him as a luchador. While a wrestler at heart, he is hired for the circus as a stuntman and is a strongman on his own account of constantly testing his prowess.

As luchadores are Mexican, so is Pocito, and speaks with throw in Spanish words. He shares this with fellow obviously Mexican Hoolio.

He is aware Monsters doubt his strength due to his size but is confident enough to not let that bother him.

Pocito is a stout, muscular, humanoid Moshling clad in his luchador attire.

He has shiny black eyes with lashes, alike Captain Squirk, but with a little green twinkle in them that matches the green of his belt.

In Diggin' Ya Lingo

Retrieved from "https://moshimonsters.fandom.com/wiki/Pocito?oldid=284210"
Community content is available under CC-BY-SA unless otherwise noted.