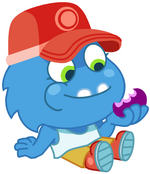 Pete Slurp is a blue Monster in the Moshi Monsters.

He is in a relationship with Lila Tweet, the monster he is picnicking with.

When you click on his picnic, you will start a game called Moshling Boshling, a minigame where you launch Moshlings such as Mr. Snoodle at the opposing Glumps.

Pete is a hairy blue monster who has two teeth sticking out of his smiley mouth. He wears a white/grey vest with sand colour shorts and red shoes.

Main
Pete Slurp and Lila Tweet are the City's youngest picknicking duo. These little monsters are best buddies - you'll rarely see the chewing chums without each other. Their hamper is packed full of goopendous goodies, but their favourite munchies by far are Lila's mum's Quenut Butter sandwiches! Yum!
Monstrous hobbies
When she's not picknicking, talented Lila loves to sing. This budding monSTAR is the best singer at her school! Clawsomely-adventurous Pete collects rare slugs, builds stuff and encourages Lila with her singing, despite being tone deaf!
You've been glumped!
The problem with picknicking all the time is that you're particularly prone to cake-thieving predators like the ghastly Glump Bloopy!
Data File
Hangout: Main Street
Catchphrases: "Nom, nom!"
Likes: Choir (Lila), Construction (Pete)
Often spotted: Mid-bite!
Notes

Looking for an adventurous friend? Look no further than Pete Slurp. A collector of rare slugs, Pete has built his own playhouse in his yard, and is never seen without his best mate, Lila Tweet. Pete is tone deaf, but supportive of Lila's singing career. 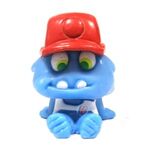 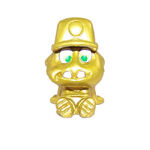 Add a photo to this gallery
Retrieved from "https://moshimonsters.fandom.com/wiki/Pete_Slurp?oldid=263112"
Community content is available under CC-BY-SA unless otherwise noted.