Mustachio is a purple Glump, named by Spookygirl. Appearing in many Missions and disguising as the Headmaster in Super Moshiversity Challenge, Mustachio is an easily recognisable Glump characterised and distinguished by their purple pigmentation and, hence the name, bushy and marked moustache; this generally gives him the appearance of a mature or chiefly monster even to the extent of resembling a "gentleman"Character Encyclopedia bio and, as such, has been seen with a number of important roles regarding disguise, viz. as the Headmaster and Thump O Glump access point Dr. Strangeglove disguise.

Is that facial fuzz for real or is it just a terrible disguise? Who knows because Mustachio is too busy barking orders and attacking moshlings with his scritchy-scratchy Bristy Brush Offs to answer silly questions.

Main
Mustachio looks like a terribly important Glump, and acts as like it, too! Dr. Strangeglove's fuzzy facial-fluffed minion loves giving everyone their glumping orders through the bristles of his wicked whiskers. Mustachio adores his moustache, but despises Moshlings - he attacks them with Bristly Brush-Offs if they ever dare to ask him questions!
Dangerous disguise
When Dr. Strangeglove dressed up a pile of his Glumps as Headmaster of Super Moshiversity, Mustachio's face fooled the Super Moshis - until they cracked the case, of course!
Looks are deceiving
With his thick, bushy eyebrows, Mister Mustachio appears to be a perfectly distinguished gentleman, but he's actually just a ghastly and dishonest Glump, with a permanently ferocious frown!
Data file
Location: Top Secret
Job: C.L.O.N.C. minion
Features: Air of authority, immaculately groomed facial hair
Notes

Is that facial fuzz for real or is it just a terrible disguise? Who knows because Mustachio is too busy barking orders and attacking Moshlings with scritchy-scratchy Bristly Brush Offs to answer silly questions.

Is that facial fuzz for real or is it just a terrible disguise? Who knows, because Mustachio is too busy barking orders and attacking Moshlings with scritchy-scratchy Bristly Brush Offs to answer silly questions.

Mustachio enjoys popularity design-wise and is commonly used in the Moshi Monsters lore.

In Candy Catastrophe, it guarded to door to the Candy Cane Caves and only let fellow Glumps through. Super Moshi, as Gloopy was allowed entrance. Mustachio tells them Sweet Tooth is counting on "Gloopy", showing a sincere loyalty for who it serves.

In Super Moshiversity Challenge, it disguised itself as the Headmaster, supposedly filling in for the actual headmaster of said school though this person was never shown, so their whereabouts are unclear. It performed the hypnotising music that caused the students to go chaotic.

In Big Top Ballyhoo, it performed as a Clump, but had an unspeaking role unlike its colleagues. Its Clump outfit depicts a caveman, which could reference to "Candy Catastrophe" where it guarded a cave for Sweet Tooth.

In The Unusual Suspects, it appeared on the list of suspects Datekeeper printed that matched the content of the love letter to Poppet. Super Moshi is not surprised and comments on it that "Glumps have feelings too".

Guard duty or not, Mustachio is shown to try to be observant of its surroundings by squinting in every direction it looks at.

In Big Top Ballyhoo, it had the highest pitch NPC files (though the difference is slight) compared to Bruiser and Freak Face, the latter being the lowest. Mustachio's NPC files were not used as it had an unspeaking role in this mission.

In Season 3: Mission 1: The Unusual Suspects

Moshi Monsters Mash Up: Code Breakers
Add a photo to this gallery 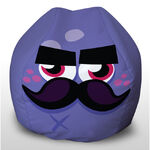 Retrieved from "https://moshimonsters.fandom.com/wiki/Mustachio?oldid=267335"
Community content is available under CC-BY-SA unless otherwise noted.