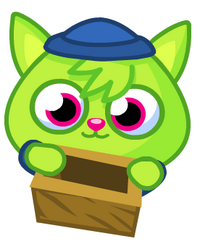 Release of The Port

This posh pussycat doesn't need to work, but when he was a kitten he took up fishing for a school project. The young kitty found it so enjoyable that he turned his back on his pampered puss life and has spent his days fishing ever since.
The purrfect catch!
Meowford has become an expert fisherman, spending much of his time at sea. He can now haul and trawl tons of tentacled octopuses on his own, and make fish leap right up into his arms!
Rich kittie
Lord Meowford is super-rich, but he never spends his Rox on luxury cruises and expensive cat nip-knacks at Horrods. Instead, he chooses to while away his time with his fishing line on his boat at The Port.
Likes
Thinking of new ways to catch fish.

Hangout On board his boat at The Port

Catchphrase "What a catch!"

Mr. Meowford is actually the Lord of Catberely Manor, working undercover as a fisherman, even though he and Lady Meowford are made of money. It started as a school project about the working cat, and became Lord Meowford's favourite pastime.

Add a photo to this gallery
Retrieved from "https://moshimonsters.fandom.com/wiki/Mr._Meowford?oldid=257847"
Community content is available under CC-BY-SA unless otherwise noted.