Moshling Boshling is a game that is playable via clicking on Pete Slurp and Lila Tweet's picnic on Main Street, released on 14th March 2011. The game can also be played at moshigames.com. The game is a direct copy of Angry Birds, taking abilities, concepts and characters and re-skinning them to Moshi Monsters assets. 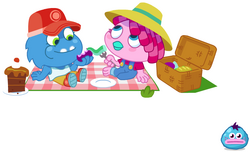 The objective of Moshling Boshling is to launch Moshlings using a slingshot, aiming to knock down towers in order to get rid of the Glumps.

Every level also has three cupcakes to collect, that can be collected by aiming for them with the slingshot. For every cupcake you collect per level you will earn ten Rox. Once you reach the daily Rox cap (250 Rox), you will no longer be rewarded with Rox. It is not mandatory that you collect all the cupcakes to complete the level, however it is mandatory to complete the actual game.

The user's progress of the game is wiped not soon after it is made; however, it is never wiped during gameplay. This is because progress is saved via the cache, so if one clears their cache, they lose their progress. Rox earned is recorded into the account so there is no risk of it being lost.

The volcano contains one level and three total cupcakes to collect.

The volcano contains one level and three total cupcakes to collect.

B in the shape of Snookums

O in the shape of Squidge

S in the shape of Hansel

H in the shape of Angel

L in the shape of Cali

I in the shape of Mr Snoodle.

N in the shape of Big Bad Bill

G in the shape of Priscilla

O is in the shape of Oddie.

The main menu on Moshling Boshling
Add a photo to this gallery
Retrieved from "https://moshimonsters.fandom.com/wiki/Moshling_Boshling?oldid=264829"
Community content is available under CC-BY-SA unless otherwise noted.