192
The Moshipedia is an encyclopedic A to Z book, released on November 7th, 2013 along with Hot Wings in-game. Written by Jonathan Green, Steve Cleverly and Megan Bell.

It comes with an exclusive Hot Wings figure that cannot be bought with a standard series, making the figure exclusive to the book, and is also why Hot Wings was released in-game the same day the book hit store shelves.

The book's title is a pun on the word, encyclopedia, replacing the 'encyclo' with 'Moshi'. The book is in alphabetical order going from A to Z in the matter of 192 pages. The book is published by Puffin and Amazon UK lists the author as "Jonathan Green".

An A-Z of everything Moshi, from Monsters and Moshlings to places, props, phrases and much much more. This perfect Christmas gift for any Moshi fan also comes with an exclusive, never-before-seen Moshling mini figure!

Puffin published a variety of Moshi Monsters Books for fans to enjoy including 101 Moshi Things to Make and Do, C.L.O.N.C. Strikes Back and many more! 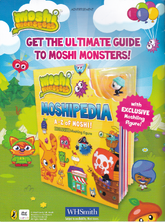 Can you tell the difference between a Mystery Moggy and a Pretty Kitty? Do you know where you can find Acrobatic SeaStars or Unlucky Larrikins in the wild? And what about the Games Starcade or EN-GEN-where are they?

Well, have no fear, you now have all this information at your fingertips, along with loads more. This Moshipedia is an A-Z guide to many of the delights found in Monstro City and beyond!

So what are you waiting for? Turn the page and delve in. From Aarrr! Pirate Flag to Zoshlings, it's time to learn your A to Z!

Retrieved from "https://moshimonsters.fandom.com/wiki/Moshipedia?oldid=284020"
Community content is available under CC-BY-SA unless otherwise noted.