The cards were released on August 28th, 2014, but some were given out to people in the queue to meet Mr. Moshi at the Moshlings Madness at Bluewater event. The event was held at Bluewater Shopping Center, Kent on August 2nd, 2014.
Giant cards (about half the size of a person) were seen during a Topps Festival. Known giant cards are Mr. Moshi and Squelch.

They are the second series of cards to cost £1, the first being Moshling Madness. Similarly to the third series of tattoos, the packaging is portrait. This is the first series to have the Mash and Mosh numbers ranging to 999 instead of 99.

Moshi Monsters Mash Up is back with this Party edition! This latest offering from Topps features a whole host of Moshi characters both old and new. Moshi fans are sure to be delighted with this new collection, which includes special Holographic Foil cards, Mini cards and Stand Up cards. But that’s not all; exclusive codes are printed inside packets for collectors to unlock items online! Moshi Monsters Mash Up Party is set to be another monstrous success! 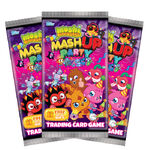 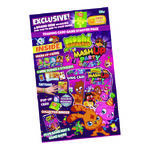 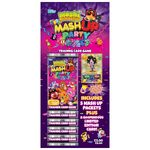 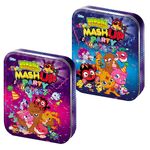 Retrieved from "https://moshimonsters.fandom.com/wiki/Moshi_Monsters_Mash_Up:_Party?oldid=276119"
Community content is available under CC-BY-SA unless otherwise noted.