The cards were officially released on September 5th 2013. Although in certain Tesco stores in England and Scotland they were released as early as August 30th. A tin was shown, but never released.

The series includes 210 cards, all Moshlings apart from the six Monsters, including holographic cards, mirror foil cards and Exclusive Moshling code cards. The packets include eight cards, costing £1, the first series to do so. 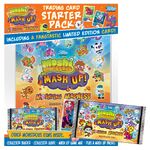 The poster found with the binder. 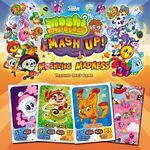 Add a photo to this gallery
Retrieved from "https://moshimonsters.fandom.com/wiki/Moshi_Monsters_Mash_Up:_Moshling_Madness?oldid=276115"
Community content is available under CC-BY-SA unless otherwise noted.