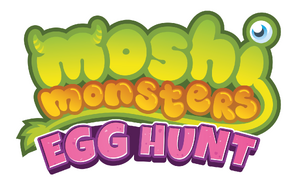 Moshi Monsters Egg Hunt is an iOS/Android app that is themed around taking care of Moshlings as you hatch them daily, tying into the Egg Hunt book. The game was released on October 26th 2016 and has a target demographic of 6-8 year-olds. The game is free to play and contains no in-app purchases, however, players can purchase a membership subscription which gives them more access to minigames, in-game items and golden spoons. The players can additionally purchase the Egg Hunt book to unlock an additional personalised Moshling of their own choice (as the app randomly generates a Moshling for the player).

Starting from update 3.6 the app is available to beta test for Google Play store members. The user can sign up to testing by visiting the app's page in the store and scrolling down to find the message. This gives the user access to updates early so that they can test the app ready for the universal release.

Moshi Monsters is back, and this time it’s all about catching and hatching Moshling eggs! Who’s in the egg? Only YOU can find out!

Hatch, customise and name your very own unique pet Moshling! Then with help from Buster Bumblechops, hatch a new Moshling friend every day to build your collection! You can then play games and solve puzzles to earn Rox, which can be used to buy monsterific food and room items. You can even wash your Moshlings and clean up their poop! Can you collect all the Moshlings and create the ultimate Moshling home?

Make your egg hunt even more monsterific with the amazing Moshi Monsters Egg Hunt book. This goopendous adventure is crammed with hidden codes and stars a totally unique, specially created Moshling named after YOU!

GAME FEATURES
- ADOPT, CUSTOMISE and NAME your very own unique pet Moshling!
- HATCH a new Moshling every day!
- CARE for your Moshlings, FEED them and decorate their home!
- SOLVE PUZZLES and play fun mini GAMES to earn ROX to spend in the SHOP!
- UNLOCK goopendous goodies using the SECRET CODES found in Moshi Monsters Series 1 Egg Hunt TRADING CARDS and the Moshi Monsters Egg Hunt book!
- ADD your FRIENDS’ unique Moshlings to YOUR collection!
- SUPER MOSHLINGS, ultra rare, cape-wearing superheroes in tough to crack egg!
- The BUMBLETRON 9000 DELUXE, a wild and wacky contraption, it’s the only thing capable of cleaning up Super Moshling Eggs!
- GOLDEN SPOONS! Lost for centuries, ultra rare and perfect for smashing open Super Moshling
Eggs!
- FRIEND COUNTER! See how many friends have added your Moshling to their collection!
- DAILY REWARDS, spin the wheel, gasp in surprise at the goopendous prizes! 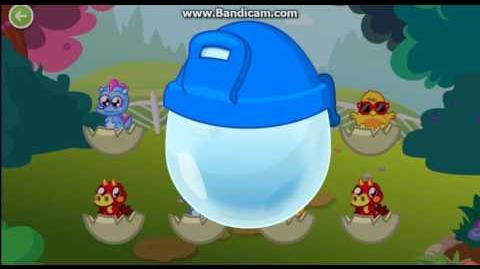 You start the app with an overview of Monstro City before you are taken into Buster Bumblechops' Moshling Sanctuary, where he shows you a Moshling egg (which is randomised for each player). You are told to keep tapping until your Moshling is free, to which Buster exclaims the Moshling's name and species. The Moshling is then added to your zoo. You are then prompted to play a game of hide and seek to find the next Moshling egg for you to hatch. Each Moshling egg takes a day to hatch.

The game is essentially hatching and finding Moshling eggs to complete your zoo. However, there are minigames the player can play to unlock items and food to decorate the Moshling treehouse, a smaller version of the player's house from the online game, excluding the Monster and just featuring the Moshlings. You can have up to four Moshlings in the treehouse at a time. There are two games the player can play at any time, mixing and matching eggs and a claw machine game. Items and food are recycled from the online game and Moshi Monsters: Moshling Zoo (video game).

Unlike the online game, Egg Hunt provides a new Moshling set, the Friendlies. This holds personalised Moshlings of which the player can obtain by hatching eggs or entering secret codes. Currently, there are 120 different possible friendlies Moshlings that a player can have: 30 characters in 4 different colour schemes. Additionally, Captain Peck serves as an exclusive code Moshling who resides in the Friendlies set, increasing this number by 1.

Remnant within the game's code is a set called the "Specials", holding Little Chief Two Scoops. Oddly, the game downloads the data for the Specials, which implies availability.

Excluding the Friendlies Moshlings, the game currently holds a total of 230 'standard' Moshlings from the following sets:

When each Moshling hatches from its egg, Buster Bumblechops introduces the Moshling:

Food items are fed to Moshlings instead of your monster. Whilst for your monster, it's part of taking care of them, keeping them happy so they can level which opens new possibilities in the game, it has absolutely no function in Egg Hunt as it has no reward nor consequences. It is comparable to the Moshi Monsters mini game Moshling Clean-Up.

Moshlings can be fed all the time. They display an icon of a fork and knife when they explicitly want food and do not move in this state. If you leave the room and come back, they are no longer hungry. When fed, Moshlings react like in Food Factory, but as there is no leveling or rewards it has no further purpose. Moshlings will leave droppings regardless if you feed them or not. There is neither a purpose for this feature, as cleaning it up will not leave them happier nor cause any inconvenience.

Interesting to note is that design wise all aspects of 'monstrous' have been removed. Sour Milk is Fresh Milk.

Unlike the items in the web-browser game, Items in Egg Hunt have no values attached to them, which they have no concept of space or weight nor can be interacted with, other than moving them. This is especially apparent with Arcade items and Cabinet items as their function as items in Moshi Monsters rendered to mere posters. One can obtain an unlimited amount of items but the rooms cannot hold more than ten.

Items can be obtained from the shop, the wheel of fortune or from hatching an egg and declining on adding a duplicate Moshling to your zoo. To get rid of items, one can send them to friends or sell them over at Dodgy Dealz.

"Candy Floor"
without the plinth

1400
(Item name should be Mystery Cauldron)

1300
(Item name should be Ghoulaphone)

Brain in a Bowl

Like the online game, Egg Hunt has an option to enter secret codes. Unlike the online game, codes are now entered using symbols and shapes instead of numbers. Codes are found inside the Egg Hunt book and redeem Moshlings that cannot be obtained by hatching eggs during normal gameplay. These Moshlings, along with the codes are:

The Friendlies Moshling(s) can be obtained by either hatching 30 Moshling eggs or entering a secret code from the book. Codes for Moshling eggs can be used once by each player. An internet connection is required to enter codes longer than three symbols as they are not stored in the app's data and thus need an external source to verify. 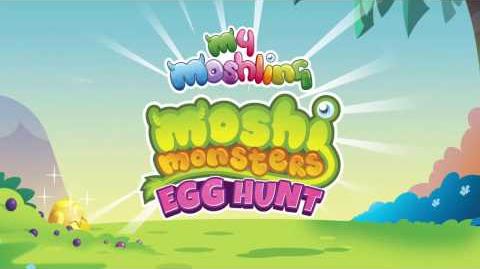 What's New in Version 1.4
Naughty Glumps were bugging us, so here's an update!
- Fixed the problem with eggs not always hatching the next day for some Moshi fans
- Some Moshlings weren't showing up correctly
- All backgrounds in the Moshling collection now show correctly
Thanks for all the feedback folks!
Get your very own personalised Moshling in the Moshi Monsters Egg Hunt book! www.MoshiMonsters.Com/eggs

What's New in Version 1.3
Mr Snoodle did a Doodle, so we've updated things a bit!

Get your very own personalised Moshling in the Moshi Monsters Egg Hunt book! www.MoshiMonsters.Com/eggs

What's New in Version 1.2
Hey Moshi fans! Here's another egg-citing update!
Discover secret codes and your very own personalised Moshling in the Moshi Monsters Egg Hunt book!
Who's in the egg? Only YOU can find out!

What's New in Version 1.1
Hey Moshi fans! Here's an egg-citing update to make sure your Moshlings are behaving. More coming soon!
Discover secret codes and your very own personalised Moshling in the Moshi Monsters Egg Hunt book!
Who's in the egg? Only YOU can find out!

Tap these three and make your choice (or not)

An egg on the map

You found an egg! Tap it!

An egg in the Dome

This egg needs cleaning up