The Moshi Monsters Animated Series is an unreleased animated TV show of Moshi Monsters, planned to have last 11 minutes per episode. The series was confirmed to have 52 episodes and was unveiled by Mind Candy on the 11th June 2013 in London, UK. Jocelyn Stevenson, Mind Candy’s Executive Creative Producer, Film & TV Projects would lead the production.

Michael Acton Smith, Founder and Creator of Moshi Monsters commented: “We’re looking forward to telling a wide range of new stories with these cartoons and taking the Moshi Monsters characters to new fans all around the world.”

The team will also be at Cartoon Digital and MIPCOM Jr this year to discuss the series and other upcoming TV projects.

Little is to be found about the project aside from Richard Dinnick's LinkedIn and About page.
Richard Dinnick is an author and wrote the Super Moshi Missions book (fiction) and The Official Collectable Figures Guide (non-fiction) both in 2012. 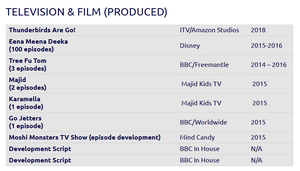 In an article posted on Pocket Gamer, Moshi Monsters' dropping revenue is mentioned. They released Egg Hunt with the accompanied storybook and were still supporting the webbrowser game by the time the article was written. Specifically it mentions the animated TV Show: