Moshi Monsters: The Movie, additional title: The Great Moshling Egg, was the first non-Music Video animated endeavor by the Moshi Monsters Franchise, going from the usual Direct-to-Youtube uploads to a cinematic release in both the United Kingdom as Australia.

Plot
Join Katsuma, Poppet, Mr. Snoodle, and the other Moshi Monsters in an action-packed, song-filled race against time! Together they must stop evil Dr. Strangeglove and his incompetent Glump sidekick Fishlips from pulverising the recently discovered Great Moshling Egg.

It was the first non-Music Video animated endeavor by the Moshi Monsters Franchise, going from the usual Direct-to-Youtube uploads to a cinematic release in both the United Kingdom as Australia.

Radio station Fun Kids held interviews with children who went to the premiere and had Katsuma and Poppet (their VAs) take over the radio station.

Further Movie promotion was held at Alton Towers, where Buster Bumblechops, Poppet & Katsuma and Dr. Strangeglove were meetable and one could limbo to obtain the Purple Glitter Mrs. Snoodle figure.

The creation of the movie prompted the introduction of the Movies Moshling set, with mayor Movie character Blinki, all of which set members were obtainable for your Moshling Zoo in Moshi Monsters through the post-movie mission The Moshi Movie Mystery.
The mission takes place after the movie, where the Main Monsters arrive for the premiere of the movie. Dr. Strangeglove, who believes everyone has come to see him on the screen, decides to steal the movie. While celebrating his theft on an open space on the Scareforce One, he is struck by lighting and drops the film reel (supposedly four of them) in the Gombala Gombala Jungle. It is partially found by Big Bad Bill, a major franchise character that was not included in the movie aside the end credits. Long story short, the premiere is held in the Hoodoo village on giant stretched out underpants.

The music video of Shoney the Amazin' Blazin' Raisin was soon released after - as to explain why the song is included on the Movie Soundtrack. A year later, Four Claw Hi Yaa Hurricane would receive its own Music Video as well.

Director Wip Vernooij created a rigging model for Furi which would make animation more dynamic and easier to work with. He used this model for Foodtube with Jamie Oliver. Regardless his efforts, there were no plans for future animation with the brand relevance declining in their attempt to move over to mobile. 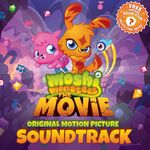 Buster Bumblechops ventures through the Gombala Gombala Jungle in search of a temple that would contain The Great Moshling Egg. Once finding it, Buster shows his great find to his search team and tumbles down the stairs breaking his leg in the process.

Poppet tends to her garden with Mr. Snoodle. Katsuma meets with her to talk about Roary Scrawl's movie in the making and how he reaches for stardom. They go into town to meet with him.

Fried Oobla Doobla, Blue Jeepers Tears and Rainbow Rox. The component to hatch the egg onto a giant monster glump.

Retrieved from "https://moshimonsters.fandom.com/wiki/Moshi_Monsters:_The_Movie?oldid=282254"
Community content is available under CC-BY-SA unless otherwise noted.