Free, but Memberships have varied expenses

Moshi Monsters was an online game whose initial aim was that one could adopt, care and nurture for their very own monster in a virtual world of Moshi Monsters, made by Mind Candy. Following success led to Mind Candy releasing a magazine, merchandise, and two music albums, both which earned Gold on the UK charts.

Monster owners could select and customise their monster, play with them, take them shopping and decorate their room. Players can add additional extra rooms and can share with friends. They had a Friends Tree and a Pinboard where they can exchange messages, though the content is regulated.

Players could become Members for a monthly fee which expands their in-game abilities and accessibility, opening areas such as The Port.

The world contains many minigames and puzzles, which could be played in order to earn Rox, the in-game currency used to buy seeds, clothes, furniture and food for your monster. Daily Prize Quests were later introduced.

Players could also collect Moshlings, pets, which could be obtained by planting suitable seeds in your Moshling Garden in specific combinations as to attract them, by playing missions, through hatching Moshling eggs, or by purchasing special Moshi Monsters merchandise that comes with unique codes. Some Moshlings are only available to Members because they require special seeds, and others with codes and certain events, etc.

Moshi Monsters officially launched to the public on April 16, 2008.[2]

Prior to this, the game went through a public beta phase. The first actual revision of moshimonsters.com, on the 14th of September, 2007, was composed of single and basic HTML text that asked anyone interested in trying the game out on release to input their email in a box;[3] soon after this, their YouTube channel was founded on November 9, 2007[4] with the Moshi Monsters video tour and, after this, The Daily Growl was created, on the 21st of December, 2007.[5] When the website released to the public, however, this likely changed as, on the 30th of April, 2008, with its public release, it was recorded to have changed.[6]
It is unknown what the site had looked like during this beta testing time, for the only people that had access thereto were the Beta testers themselves, all of whom are marked by the Beta Tester Certificate; the majority of people with this item are Moshi Monsters staff, showing that the website had staff prior to even being fully released. However, as stated, there was a video tour during the beta testing period, and very little has changed, with all shop interiors and shopkeepers looking identical to their alpha look, but their exteriors have been changed. There are some other minor changes, too, but as far as the locations go, everything has stayed the same - note that this was all that was shown in the video, however.

Despite it being beta and thus exclusive to a very small amount of people, The Daily Growl functioned as normal - in fact, its content was very variable, much contrasting the Daily Growl of the more-developed Moshi Monsters. Things such as interviews and updates[7] were documented, as well as things like Roy G. Biv Day, the latter of which being celebrated into the later years of the game.

Many beta accounts have since been "de-activated" - there are many examples of comments left by users prior to April 16, 2008 that no longer have visitable accounts. As such, their profile picture is anonymous and their account unvisitable. However, all Staff Beta accounts still exist, hence the existence of the Beta Tester Certificate.

On September 30th, 2015, Divinia Knowles announced to The Guardian newspaper that Mind Candy are currently in plans to shut down and relaunch the game with a target audience of four to seven-year-olds. This is due to multiple factors, including the decline in Moshi Monsters' life cycle as well as the fact that the game was built using outdated Flash software, which does not work with the new devices Mind Candy plan to take Moshi Monsters to. Notwithstanding this, previous CEO and founder, Michael Acton Smith, denied the website would be closing on his Twitter account.[9] In a recent interview with The Argus, Smith confirmed a relaunch of Moshi Monsters would take place in 2017.[10]

The release of the App Egg Hunt is considered the announced reboot of the franchise. Though a reboot often means re-doing and changing, Egg Hunt takes place within the current timeline and universe of Moshi Monsters and requires their demographic to already know about the characters and world, which is odd as their aimed demographic is one new to the franchise. Many consider Egg Hunt to be a soft reboot rather than the standard reboot.

The format of gameplay is similar to Moshi Monsters, but now with a (self-insert) Moshling character instead of a Monster character to care. As Moshi Monsters itself remains live but not updating, Moshlings who are still awaiting release in the web browser game are being released on the App.

On July 19th, 2017, a "Twitter Party" was held, hosted by the brand itself and several "mom blogs" who promote the latest kids content. Announced 3 days prior with great urge the coming days, no information of what this party would contain was made clear. The time and date it was held was out of range for most children in the UK, thus impossible for the aimed demographic to attend aside the fact they also would be too young for social media. The party proved nothing more than an advertisement in which they promoted the App - claiming it to have topped the charts - and promoted Design a Moshling Contest 2017 through the mom blogs who were later revealed to have been paid to do so. The success of this marketing strategy is questionable as it did not reach beyond the scope of the paid mom blogs promoting it. 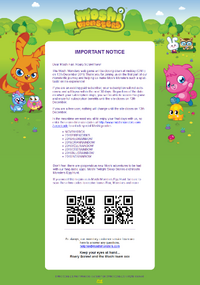 On 13th November 2019, it was officially announced that the online game would be lapsing and closing one month later on midday GMT of 13th December 2019. Some users who had emailed customer service, however, had received this news in the days prior. Billing for memberships of existing paid subscribers would lapse in the month to follow and players were granted access to their membership features until the game's closure. A message from Roary Scrawl was posted when players tried to view the Daily Growl or any of the main Moshi Monsters pages explaining such where multiple secret codes for 100,000 Rox, Catherine Wheel, the Build-A-Rainbow Set and Egg Hunt content were released to mark the occasion.

While no clear idea as of how such a closure would take place, the community set up streams to follow it live. At around 2PM the game would glitch and upon reload a new message would pop up to inform that the game has been closed. However, if you were still logged in on your browser, and you would visit www.moshimonsters.com/monsters/(your acount name) you could still enter the game. As long as you would avoid the "My Room" button, you would not be send to the closure message. Within the game itself, the Zoo, Garden and Message Board were "closed" (no longer loading) but by means of Video Gifts with an attached message, players could still reach each other. Earlier in 2019, the Food Factory was put back "under construction" and the News Panel on the top right was changed back to "BFF News". As of closure, the "BFF News" was removed as well. The Moshi Monster servers did not fully shut down until a week after the initial scheduled date.

On 29th January 2020 the final account closed, with user patrickhj holding the record of having kept up his room for the longest time.

The exact time period is currently unknown and may vary, but it is estimated to be at least four years of inactivity. If a Moshi Monsters account was last active sometime in mid-late 2015, the account will not be deleted as of early 2019. It is unknown when Mind Candy started deleting inactive accounts but the earliest published cases of these deleted accounts were in 2018. 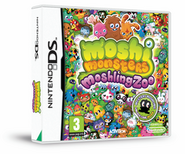 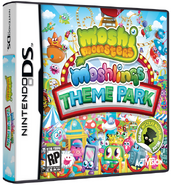 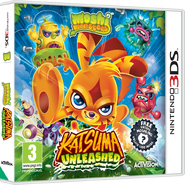 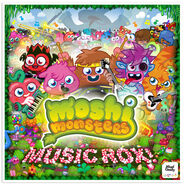 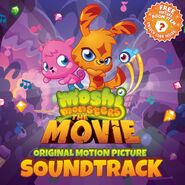 Four of the Monsters in real life