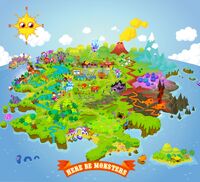 Monstro City is a densely-populated city where the game, Moshi Monsters is situated. It is home to Moshlings and Monsters and features stores, buildings and scenery.

Although there are many users, there is only one visible home on the map, however other monster's houses can be seen on Main Street, Sludge Street, Ooh La Lane, The Port, Candy Cane Caves, Bleurgh Beach, and Gift Island.

On the bottom right hand of Monstro City is Music Island, which was discovered in March 2012. It is home to Bobbi SingSong and Woolly Blue Hoodoos.

Places that can't be visited are in bold, Mission places are underlined.

Below is a chart that displays areas with specific colours depending on their accessibility.

Main Article: Music Island
Places that can't be visited are in bold, Mission places are underlined.

Retrieved from "https://moshimonsters.fandom.com/wiki/Monstro_City?oldid=265621"
Community content is available under CC-BY-SA unless otherwise noted.