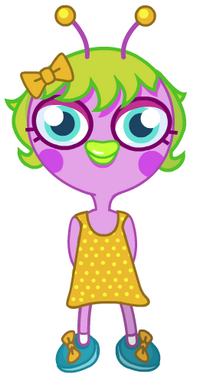 Mizz Snoots is the shopkeeper of Horrods. She is also probably the neatest and fussiest monster in Monstro City.

When you enter her shop she says, "Greetings." What can I get you?" or "Good day. Monsters are my business and business is good!" alike other shopkeepers.

Main
The winner of a number "Mizz Monstro City" beauty contests and a scholarship to the OxSnout University, Hoity-toity Mizz Snoots has always held her head up a little higher than those around her. Head to the monstrously exquisite Horrods and Mizz Snoots will help you with all your shopping needs.
Moshi-tabulous style
Mizz Snoots perfects her poshi-Moshi look with ferocious facials, daily antennae polishes and expensive highlights and hairdon'ts. It's no wonder this glamorous It-monster constantly appears in the Gross-ip columns of Miss Preen Magazine.
Data File
Hangout: Horrods
Catchphrase: "Good day!"
Likes: Shopping, powdering her beak
Often spotted: In all the right places
Notes

Winning several beauty pageants and a scholarship of OxSnout University, Mizz Snoots has always held her head high. When she's not busy selling extravagant items at Horrods, she can be seen in the pages of Miss Preen Magazine.

Main
For upwardly-mobile monsters, there's only one place to shop in Monstro City - the hoity-toity home of extravagant un-essentials, Horrods. It's so exclusive that only Moshi Members can get through the door, so for those of you who haven't met her, and for regular Horrods customers, too, here's the lowdown on Horrods' elegant, upper-class shopkeeper Mizz Snoots, the neatest, fussiest monster in town!
Eye Say!
Mizz Snoots is famous for her fluttering eyelashes. They flutter faster than flutterbies, which is very pretty but has been known to attract hungry birds.
Record Breaker!
As a young monster, the elegant Mizz Snoots was something of a tomboy. She still holds the records at her school for mud pie making and Rox Tree climbing.
Accompanying image of Mississippi Mud Pie and Mizz Snoots strapped to a Rox Tree
Bling Thing!
The china pots that sit behind Mizz Snoots' shop counter are original Bling Dynasty[note 1] vases. They're older than Elder Furi and more valuable than all the monsterpiece paintings in the Googenheim Museum[note 2] put together!
Accompanying puzzle
Beauty Queen!
With her exquisite fashion sense and lush looks, Mizz Snoots is a regular on the beauty pageant scene. She's the only monster to have been crowned Miss Monstro City three years in a row!
Accompanying image of her with a tiara and Miss Monstro City-signifying ribbon
Poshi Moshi!
Her trademark look - gold polka dot dress and matching hair bows - is called 'Poshi-Moshi'. Mizz Snoots once triggered a fashion craze after she appeared on the cover of CosMonstroPolitan Magazine.[note 3]

Mizz Snoots is a monster with insect and bird-like features. She has pink skin and is clad in a spotted golden dress. Her green hair is short with playful bangs, decorated by a golden bow on the right, and she has a pair of antennae on her head, which end in golden bulbs. She wears dark blue trainers, which themselves sport bows similar to the one by her hair.

Her turquoise eyes with dark pupils are slightly reminiscent of compound eyes due to their size and their position on her head. She has a beak-like mouth, with its tint matching her hair colour. She has purple blush on her cheeks and her eyelids are dark pink in colour. Some artwork throughout the franchise depict her with a slimmer figure than usual.Series 2 Mash Up Height-wise, she seems to be taller than fellow model Tyra Fangs.

As stated, she has a slimmer figure but is shown to shine, as if she were in a pageant at that moment, perhaps connoting such. In series 1 and 2, she looks condescending, too, perhaps standing as an intent testament to her character, which tends to be materialistic and arrogant because of her success - she does run a shop with two incredibly valuable pots therein along with its name parodying that of London's Harrods, one of the most famous shops by quality; she did graduate from OxSnout UniversityCharacter Encyclopedia, which parodies Oxford, one of the most renowned European universities by beauty and student turnouts; and she has won a beauty pageant three times in a row, something which is considered rare by the fact that judges can be biased over multiple-succession winners.

The photo on the first post of Roary's Twistmas fiasco[1]

Mizz Snoots holding a bottle of Toad Soda in Moshi Monsters: The Movie