Mini Ben the Teeny TickTock is an Ultra-Rare Moshling in the Worldies set in Moshi Monsters. They are based on the Elizabeth Tower. Mini Ben is noisy but posh. They enjoy eating cucumber sandwiches.

'CLONG!' Don't be alarmed, Teeny Ticktocks are the noisy Moshlings who love chiming on the hour, every hour. I always stuff my socks in my ears when I'm tracking them down. Why? Because I once startled a sleeping TickTock and the boinging nearly burst my eardrums. Ouch! When they're not swaying to and fro, making their bells go bong, these terribly old-fashioned chaps enjoy waxing their bushy moustaches, nibbling cucumber sandwiches and asking everyone the time. Well have you ever tried looking at a clock that's on top of your head? It's harder than you think!

Don't be alarmed! Teeny TickTocks are noisy Moshlings that love chiming on the hour. When they're not swaying to and fro, making their bells go bong, these terribly old-fashioned chaps enjoy waxing their bushy moustaches, nibbling cucumber sandwiches and asking everyone the time. Have you ever tried looking at a clock that's on top of your head? It's harder than you think!

Main
Tally-ho, chaps! Dandy Mini Ben and fellow Teeny TickTocks are posh and incredibly noisy Moshlings, who love chiming away like clockwork! Frightfully eccentric in every way imaginable, TickTocks like talking about the weather, and swaying to and fro to make their bells go "GLONG!"
Classy clonging
TickTocks are very traditional. They spend their leisure time waxing their moustaches, munching soggy cucumber sandwiches and asking what the time is. They may seem strange, but these timely timekeepers can't see the clocks on their own heads!
Slurp, slurp!
Righty o', it's time for a cuppa! Mini Ben loves caviar canapés, washed down with a dainty, delicious cup of hot sweet tea. Don't mind if you do!
Data File
Moshling type: Worldies
Species: Teeny TickTock
Habitat: The foggy river banks near Westmonster Abbey
Worldie chums: Liberty, Cleo, Rocky
Notes

CLONG! Teeny Ticktocks are the noisy Moshlings that spend their days on the foggy river banks close to Westmonster Abbey. CLONG! They love fish and chips, drinking tea and waxing their moustaches!
CLONG! They chime on the hour - every hour - and wander about making their bells go CLONG! Teeny Ticktocks often nibble daintly at cucumber sandwiches and ask everyone the time because they can't see the clock faces on their heads! CLONG!

If only Teeny TickTocks were as trusting. These upper-crust ding-dongers don't take kindly to collectors. Matter of fact, they usually try poking intruders away with their umbrellas and boinging their bells. Best way to trap 'em is to change the time on their clocks to when they are sleeping. Confuses 'em rotten. What time is it? It's collection time!

Teeny TickTocks can often be spotted on the foggy banks of Westmonster Abbey. 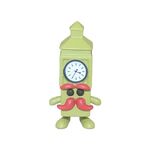 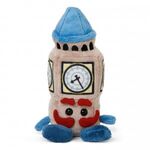 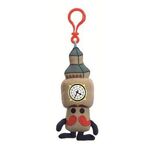 Retrieved from "https://moshimonsters.fandom.com/wiki/Mini_Ben?oldid=283036"
Community content is available under CC-BY-SA unless otherwise noted.