Main Street is, as its name suggests, the main street of Monstro City.

It has Flutterby Field, the Gross-ery Store, Yukea, Bizarre Bazaar, a statue of Elder Furi (recently) and En-Gen also The Daily Growl building and another building, unknown to what it will be. There used to be a Timernator Statue, but it later got replaced with Elder Furi.

It also has a billboard that has a preview of the newest Super Moshi Mission and it also contains a billboard near The Port entrance saying all the latest members. Moshling Eggs appeared next to the picnic often which would be picked up by members, taken to the Moshling garden and hatched to receive a Moshling.

A portion of Main Street 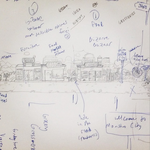 An original sketch for Main Street

Another portion of Main Street

A portion of Main Street with Zack Binspin

Retrieved from "https://moshimonsters.fandom.com/wiki/Main_Street?oldid=267203"
Community content is available under CC-BY-SA unless otherwise noted.