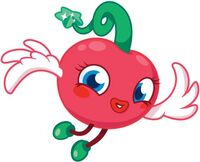 Luvlis are the fifth most popular species of monster. They are lovely, as they describe themselves. They love all things pink, are very glitzy and love going shopping (Luvli's Looks, of course). They always have the best of everything, they don't settle for just normal - they settle for fabulous items.

They are true divas and they really react if they don't get their way, though under those layers of prissy personality is a heart of gold. If players feed them too much they get very angry and get depressed.

Luvlis are flutterly amazing with a sprinkling of magical hokery-pokery! You never know if they'll wow you with their star-tipped stems. It's enough to give you glittery goosebumps!

Main
Luvlis are absolutely flutterly amazing, with lashings of magical hokery pokery and a glittery star on top! These sparkly monsters think of others as mere mortals who they love to dazzle. No Moshi is ever sure whether Luvlis have put a spell on them, or if lovely Luvlis are just naturally charming! Moshi-cadabra!
Conjuring capers
Luvlis just love giving Monstro City's residents glittery goosebumps with their magical powers. They use their star-tipped conjuring stems to create all kinds of fangtastic spells!
Magical moves
Luvlis make great gymnasts. Flapping their dainty little wings in the air, these cute critters adore spiralling twirly, wirly ribbons in pretty patterns.
Data File
Habitat: Monstro City
Catchphrases: "Greetings mortals!", "Hokery pokery!"
Monster mates: Diavlo, Furi, Katsuma, Poppet, Zommer
Notes

Luvlis are anthropromorphic cherry creatures with white wings. Lacking hands and arms, they are shown to use their wings like hands and still remain afloat.

Luvlis are focused on outer appearance as a way of communication. They are rather timid in speech. The persona of the movie addresses everyone with "Darling" and most dialog shows the power of her self love. They describe themselves as glamorous and sassy.

In Katsuma Unleashed they appear to be unable to fly and instead hop around like birds who fell out of their nests too early. This choice was made as Diavlo was already given flight as an ability and they needed something alternative for Luvli who normally also can fly.

A "*" indicates that the line can be said regardless of the Luvli's Happiness Points.