Lubber the Whimsical Whale is a rare Moshling in the Salties set in Moshi Monsters. They are a whale, ironically, with armbands on. Lubber is interested in joining the Moshi Navy and loves whistling naval salutes.

Being a rubbish swimmer is a pain in the blubber when you're a Whimsical Whale, so thank goodness these jovial Moshlings wear armbands. But why are they so obsessed in joining the Moshi Navy? Perhaps it's the uniforms and jaunty hats? Whatever it is, they can't help whistling naval salutes via their blowholes. T-toooot!

Look in the paddling pools near Bleurgh Beach and you'll probably see a few of these breezy Moshlings splashing about having a whale of a time. 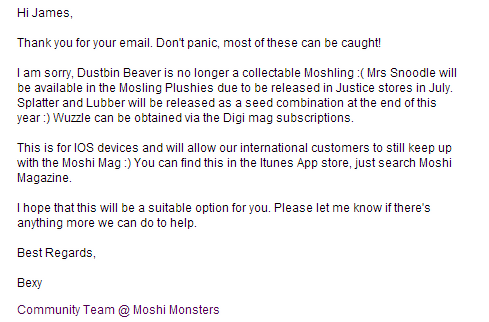 Lubber is above the Moshi Monsters Logo.

Retrieved from "https://moshimonsters.fandom.com/wiki/Lubber?oldid=272347"
Community content is available under CC-BY-SA unless otherwise noted.